Several temples and Durga puja pandals have come under attack in Bangladesh over the past few days, triggering clashes and tension. 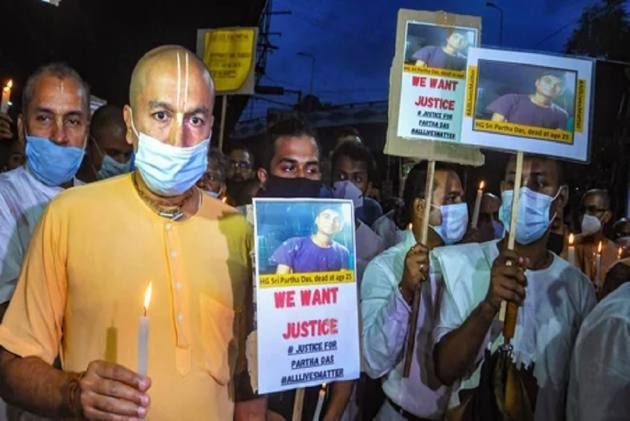 Member of the International Society for Krishna Consciousness (ISKCON) on Sunday held demonstrations outside the Bangladesh Deputy High Commission in Kolkata seeking action against those who attacked its temple in Bangladesh that left one person dead and many injured.

The protestors demonstrated outside the Bangladesh Deputy High Commission for around two hours as the police barricaded its entrance.

Members of ISKCON Mayapur and Kolkata on Sunday took out a candlelight march, sang kirtans to the accompaniment of 'khol kartal' and chanted ‘Hare Krishna’ at both the places. Mayapur is the global headquarters of ISKCON.

Many of the protesters held posters in hand that sought protection for Hindus in Bangladesh.

"We are anguished and hurt. We promote peace and brotherhood. How could a mob target us? We have always been on the side of the people of Noakhali (in Bangladesh) all these years," Radharaman Das, the Kolkata vice-president of the International Society for Krishna Consciousness (ISKCON), maintained.

Das also said that ISKCON members would on Monday hold protests outside all embassies, consulates, high commissions of Bangladesh around the world, demanding security for minorities in that country and action against those involved in the attacks.

He added that a letter has been written to the United Nations protesting against the incident.

"We call on the Govt of Bangladesh to ensure the safety of all Hindus & bring the perpetrators to justice."

On Saturday, it said that one ISKCON member, Partha Das, was killed by a mob of over 200 people. His body was found in a pond next to the temple.

Several temples and Durga puja pandals have come under attack in Bangladesh over the past few days, triggering clashes and tension in the neighbouring country. At least four people are said to have died in the violence.

Bangladesh Prime Minister Sheikh Hasina, earlier this week, said action will be taken against those trying to "disturb communal harmony".

She said the perpetrators will be hunted down and punished.

The Ministry of External Affairs (MEA) noted that the government in the neighbouring country has reacted promptly to ensure that the situation was under control and said that the Indian mission is in close contact with the Bangladeshi authorities over the matter.

IPL 2022 Retention: Who Stays And Who Goes - Full Team Lists