Farmers’ Protests: Meanwhile, the Supreme Court-appointed panel to resolve the current crisis is scheduled to hold its first meeting today. 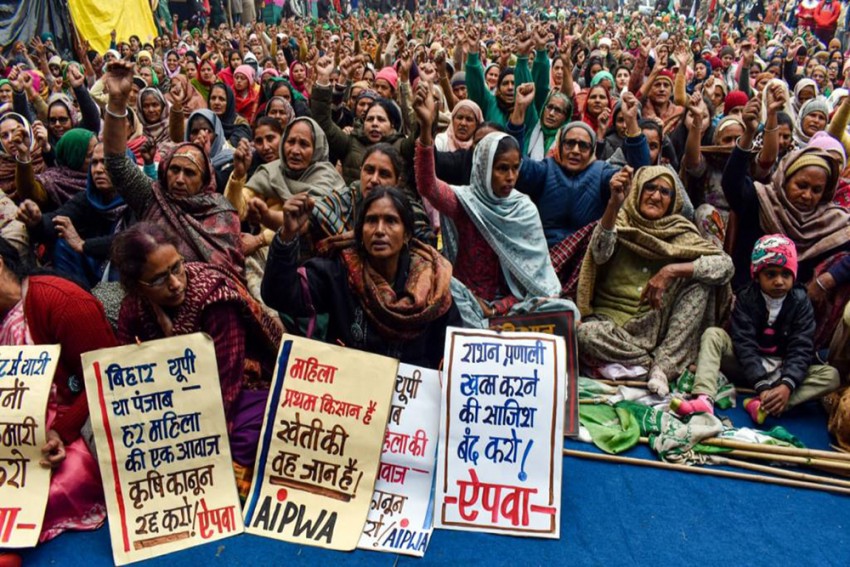 Women farmers during a protest against new farm laws on the occasion of Women Farmers' Day at Tikri border in Delhi on Monday
Mohsin Javed
Outlook Web Bureau 2021-01-19T08:31:35+05:30 Tenth Round Of Talks Between Protesting Farm Unions And Centre Postponed To Wednesday 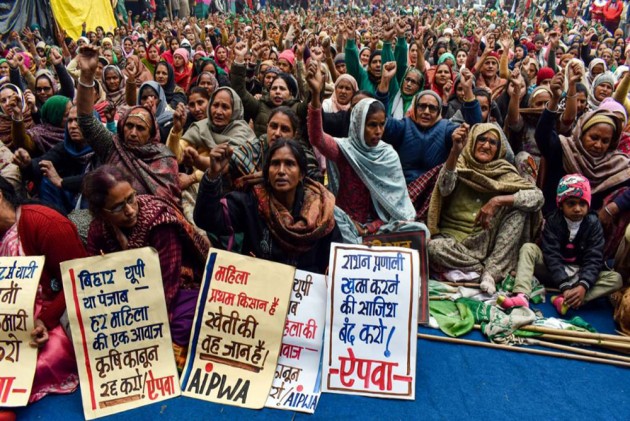 The tenth round of talks between the Centre and protesting farm unions that were scheduled to be held today have been postponed to Wednesday.

This comes just a day after the Supreme Court heard a plea filed by the Centre seeking an injunction against the proposed tractor march, that is scheduled to be carried out by the protesting farm unions on January 26 in Delhi.

"We will carry out a tractor parade on the Outer Ring Road in Delhi on Republic Day. The parade will be very peaceful. There will be no disruption of the Republic Day parade. The farmers will put up the national flag on their tractors,” Swaraj India president Yogendra Yadav said while addressing a press conference at the Singhu border protest site on Sunday.

The Supreme Court, on Monday, declined to pass any orders on the Centre’s application filed through the Delhi Police seeking to restrain farmers from carrying out the tractor rally on Republic Day.

Meanwhile, the Centre has said that both sides want to resolve the stalemate at the earliest but it was getting delayed due to involvement of people with other ideologies.

Asserting that the new farm laws are in the interest of the farming community, the government said obstacles do come whenever good things or measures are taken and it is taking longer to resolve this issue as farmers' leaders want a solution their own way. "The government's ministerial meeting with farmers unions will be held on January 20 at 2 pm at Vigyan Bhawan, instead of January 19," the Agriculture Ministry said in a statement on Monday.

Meanwhile, Supreme Court-appointed panel to resolve the crisis is scheduled to hold its first meeting today. "The Government's ministerial meeting with protesting farmers' unions was fixed on January 19. Due to inevitable reasons, it has become important to postpone the meeting. Now the meeting will be held on January 20 at 2 pm at Vigyan Bhawan, New Delhi. Request you to attend the meeting," Agriculture Secretary Sanjay Agarwal said in a letter to 40 farmer unions.

The previous rounds of talks between the government and farmers failed to break the ice between the two sides, as protesting unions have stuck to their main demand for repealing the new laws, but the government has refused to do so.

Speaking to PTI, Minister of State for Agriculture Parshottam Rupala said: "It is different when farmers talk to us directly. When leaders get involved, then it becomes difficult. There could have been early solution had the discussions were held with farmers directly."

Since people of different ideologies have entered into the protest, they want a solution in their own way, he said. "Both sides want a solution, but they have different points of view and hence it is taking more time. But a definite solution will emerge," he noted.

Thousands of farmers, especially from Punjab, Haryana and parts of Uttar Pradesh, have been protesting for nearly two-months at various Delhi border sites against the three farm laws enacted by the central government in September 2020.

Union Agriculture Minister Narendra Singh Tomar, while addressing a virtual event, reiterated that the three farm laws will be beneficial for farmers. "These laws were expected earlier but the previous government could not implement because of pressure. It was the Modi government that took a bold step and brought these laws passed in Parliament... Whenever a good thing happens, there are obstacles," Tomar said.

Dalit Girl’s Body Found Hanging From Tree In UP, FIR Filed Against 3 For Rape