The BJP spokesperson said Kashmir society including power-hungry politicians are responsible for the inhuman killing of Makhan Lal Bindroo. 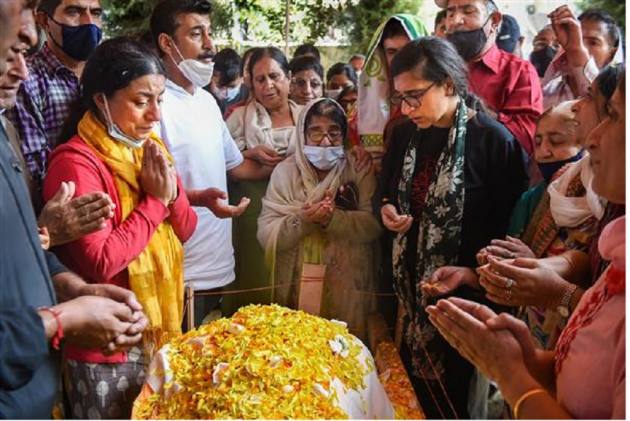 The Jammu and Kashmir BJP today issued a strong statement blaming the mainstream politicians and the security lapses for the killing of prominent Kashmiri pandit chemist Makhan Lal Bindroo.

“It is not just another brutal murder of one more member of minority Hindu community in Kashmir. It is brutal assassination and is the murder of trust, love, affection, faith and hope,” said Girdhari Lal Raina, spokesperson of BJP in Jammu and Kashmir.

He said Makhan Lal Bindroo was gunned down in broad daylight in Srinagar and Kashmir society including power-hungry politicians are responsible for his inhuman killing.

“Coward terrorists fired shots provided by their masters, but the so-called mainstream power-hungry politicians who issued inflammatory statements about imaginary “division of Muslim votes” are equally responsible for breeding revulsion against religious minorities,” Raina said. He said he was questioning terror apologists for their silence beyond customary cautious condemnations of a brutal murder.

We are all proud of Makhan Lal Bindroo's courageous daughter Dr Shraddha. We are partners in the grief of this young woman, her brother Dr Sidharth and their mom. Our unequivocal condemnation to all such innocent civilian killings in Kashmir. pic.twitter.com/QtPS34oFZ8

“How does one explain the silence of convenience as Makhan Lal Bindroo was shot dead by the assailants from point-blank range while he was at his pharmacy dispensing medicines? That Mr Bindroo was eliminated in spite of being a perfect example of claimed brotherhood and much-abused term “Kashmiriyat.” Doesn’t it expose the factual nature of violent conflict in the valley and real motives behind death and destruction aided and abetted by forces across the border,” he asked.

“Bindroo ji did not leave Kashmir in 1989-90 along with rest of his community he continued to serve people by providing much needed medical services to one and all. He contributed materially to social and even religious causes of majority community yet he was chosen as a target not for his political affiliation, not for his occupational incompetency but only because of his religious faith,” the BJP spokesman said.

Raina said he is cautioning against the continued silence of the so-called civil society. “Kashmir has already seen a lot of bloodshed. It is ethnically cleansed of religious minorities.  Generations have suffered immensely and madness will stop only when the majority community decides to speak and withdraw religious sanctions used as cover by mindless killers. The radicalisation of Kashmir society must be reversed,” he added.

“Security establishment also cannot escape its responsibility. Overground workers and sleeper cells are reportedly being activated. For weeks it was in the air. Terrorists are looking for soft targets like ML Bindroo, Ajay Dhar and Virender Paswan. Security strategy needs to be re-evaluated and holes plugged. A nation can ill afford to see Kashmir receding back to the mayhem of the nineties,” he added.

On Tuesday evening militants killed Bindroo at his shop in the high-security zone of the Iqbal Park area. This was followed by the killing of a non-local roadside Bhelpuri vendor in Lalbazar of Srinagar. In the third attack in north Kashmir’s Bandipora district, militants shot dead a civilian identified as Mohammad Shafi Lone.

The killing of Bindroo has shocked Kashmiri society as condemnation is pouring from all sides.

"Kashmiri Pandits are part and parcel of the local shared history, and cultural ethos. Protecting the pluralistic visage of J&K tops the agenda of NC. Such acts of violence are alien to our culture and ethos. There is no place for such violence in today's world. Those behind this heinous act should be named and shamed and given exemplary sentences. Such acts shouldn't divide us. The best retort to such violence is to strive for more unity than ever before. Our communal bonhomie and strings of brotherhood are age-old and have stood the worst of times," Farooq said.

CPI(M) leader Mohammad Yousuf Tarigami Wednesday also visited the residence of  Bindroo.  Tarigami called late Bindroo an upright man who stood the test of time-defying all odds and stayed in Kashmir with his brethren to serve the people. He said Bindroo never asked for protection with the belief that he was safe among his own people.

"Yesterday evening a non-local vendor was killed in Lalbazar area of Srinagar and another civilian in Bandipora. This unfortunate killing spree must be put to an end as there is no justification for such heinous crimes.

Such brutal incidents are inhuman, unfortunate and the perpetrators have achieved nothing except adding more pain to the victim families," he added.

"Each one of us must speak and raise our voice against such barbaric acts," he added.