The AIIMS Brick, Is It Stolen? BJP Asks Udhayanidhi Stalin 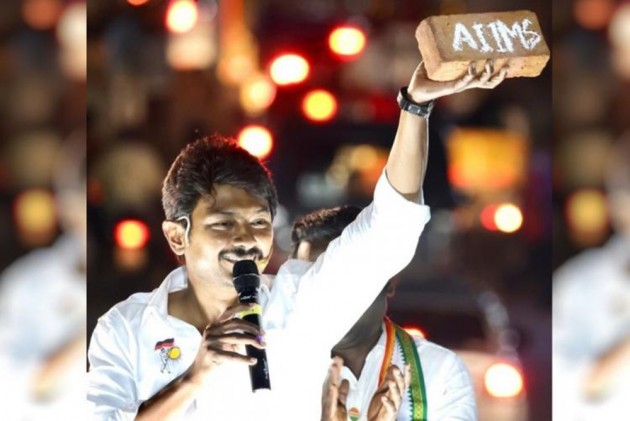 It might be another brick in the wall, but it definitely is in the eye of a political storm in Tamil Nadu’s heated election campaign. And now it has been dragged to a police station as well.

Udhayanidhi Stalin, son of DMK president M.K. Stalin, has been flaunting a brick at various election meetings, claiming it represents the AIIMS Hospital that had been built by the central and state governments near Madurai. The brick, painted with the letter AIIMS, and Udhayanidhi’s derisive quip would invite laughter among the crowd especially in the Southern districts of the state that were to benefit from the hospital.

The DMK youth wing leader would remind the voters that the AIIMS was announced in 2016 and the foundation stone was laid by Prime Minister Narendra Modi ahead of the 2019 Lok Sabha elections. “And they only have this brick to show you for the hospital,” he claimed. Udhayanidhi’s constant jibe has been a sore point for both the BJP and AIADMK as they have been unable to defend the long delay in the project taking off.

But a BJP functionary decided to get back at the DMK scion by filing a police complaint that he had stolen a brick from the construction site, which he claimed was an offence. The BJP functionary, Needhipandian, has filed a complaint at the Kovilpatti police station that Udhayanidhi had stolen the brick from the AIIMS construction site, where a 5.5km long compound wall to protect the property was coming up. “Since Udhayanidhi himself had claimed at a public meeting at Vilathikulam bus stand on March 25 that the brick was from the AIIMS project site and had also displayed it, he should be booked for stealing government property under IPC 380 and also the stolen brick should be confiscated,” Needhipandian said in his police complaint.

The project had been delayed due to protracted negotiations with Japan International Cooperation Agency (JICA) which finally agreed to fund 85 per cent of the total cost of Rs 2,000 crore with the remaining 15 per cent to be contributed by the central government. Only recently, two Lok Sabha MPs – Raveendranath Kumar, son of deputy Chief Minister O. Panneerselvam and Virudhunagar Congress MP Manickam Tagore were appointed to the governing body of AIIMS Madurai. The state health minister C. Vijayabhaskar also disclosed that construction was apace at the 262-acre project site. “Stalin’s son is misleading the public just to win a few more votes,” he said.

In fact, the BJP and AIADMK are hoping that Prime Minister Modi would make an announcement about a target date for completing the hospital when he addresses an election meeting at Madurai on April 1. “Well, the delay has been an embarrassment when AIIMS sanctioned for other states are more than half way through their construction. We hope the project gets completed before the 2024 Lok Sabha elections,” said a state BJP functionary.

Meanwhile, the Kovilpatti police have informed the complainant that his complaint would be taken up after the April 6 elections since most policemen were on election duty. By then the brick would no more be an election issue.