The Beautification Of Sattal Lake: An Environmental Deathtrap

The 'development' project has made the locals and the stakeholders concerned about the fragile ecosystem of the area as the Western Himalayan belt is attributed to high conservation importance. 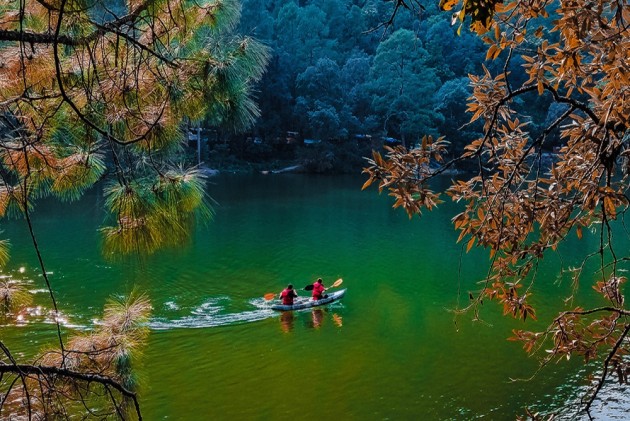 In an ongoing quest to save the Himalayan terrain from drastic re-development and environmentally damaging practices, 'Save Sattal Lake' campaign from the Nainital district is gaining momentum.

On May 10, 2021, a letter was drafted to the District Forest Officer of Nainital to recognize Sattal as the “Sattal Conservation Reserve”. Since then, the residents and locals have raised multiple concerns via a social media campaign and a petition with approximately 11,300 signatures are floating on the internet. An RTI application has also been filed to gain further information on the project whereby the Forest Department, Irrigation Department, the Housing and Urban Development and the Kumaon Mandal Vikas Nigam are requested to share the planning steps.

Moreover, a proposal requesting for the status of a ‘conservation reserve’ is to be presented to the PCCF ( Principal Chief Conservator) along with the endless wait to receive the response on RTI. As per the updates on  savesattal.thereisnoearthb.com/, the campaign is also gravitating towards compiling a PIL soon to seek a desirable response from the authorities.

Sattal lake area is located in the lower Himalayas at an altitude of 4000 feet and a distance of 23 kilometers from Nainital. The lake area is an idyllic haven with a group of seven lakes, namely Panna or Garud Tal, Nal-Damayanti Tal, Purna Tal, Sita Tal, Ram Tal, Lakshman Tal and Sukha Tal. With its dense forest of oak and pine trees, the area is a major tourist attraction in terms of its rich and exquisite flora and fauna. With the forest fires and increase in the number of environmental hazards occurring in the region, the area is going to be subjected to a ‘re-development drive making it the bone of contention between the residents and the government. The project involves extensive construction drives along with converting green paths into cemented roads and developing recreational centres like children’s parks, tourist viewpoints and beautification of the landscape. All this is inadvertently going to adversely impact the ecology and the biodiverse ecosystem of the area, which is comprised of 500 species of natural and migratory birds and 525 varieties of butterflies.

The “development” project has made the locals and the stakeholders concerned about the fragile ecosystem of the area as the Western Himalayan belt is attributed to high conservation importance. The area has been labeled as an “Endemic bird area” along with the fact that 35-45% of the bird species found in the Sattal cannot adapt to other ecological spaces.

The development project is sure to impart irreversible damage to the bird habitat. The authorities are time and again persuading that the project initiated would not disturb the existing rich ecology, but the construction projects have completely different stories to offer. The letter drafted by Aagnay Budhraj, the Sattal resident who has heralded the campaign iterates, “We strongly feel that coordinated planning and action between different stakeholders can lead to good sustainable results. The active participation of local communities is not only necessary but also crucial to ensure environmental conservation.”