The Brief Calls I Wait For: A Friend Of Umar Khalid On Love And Friendship

A year and half since Umar Khalid was lodged in Delhi’s Tihar Jail under UAPA Act, Banjyotsna Lahiri recalls moments of love, struggle and joy surrounding her close friend. 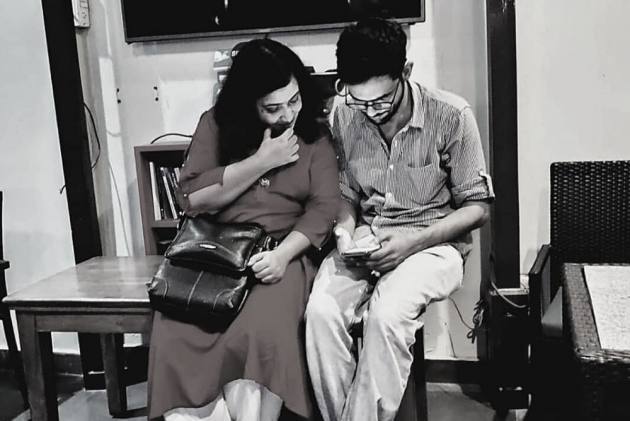 “Umar came over to my place, we had breakfast together. And then on the intermittent night of September 13-14, 2020 he was arrested. We knew this was coming,” says Banjyotsna Lahiri.

A year and half since former JNU (Jawaharlal Nehru University) student Umar Khalid was taken in custody and put behind bars at Delhi’s Tihar Jail under the Unlawful Activities (Prevention) Act, Lahiri recalls moments of love, struggle and joy surrounding her close friend.

Umar Khalid, the 34-year-old Indian activist, who has been accused in the 2020 North East Delhi riots, remains in jail as an undertrial despite protests and demands for his release. Like him, the fate of several other youth activists are today trapped behind bars.

On September 12, 2020, when Umar was in Rajasthan, a notice was posted on the door of his flat in Okhla. He was asked to appear before the Delhi Police. Slapped with a sudden notice Umar had to drive down to Delhi overnight. For a little while, he went over to Lahiri’s place and had breakfast, then he left for his home.

“In the wee hours of September 13, news broke that Umar was arrested,” says Lahiri.

She adds, “Everyone made Umar the prime accused of the riots. Following Amit Malviya's tweet from Umar’s long speech delivered in Amravati, Maharashtra, we could sense a storm brewing. And this time we knew it would be a big one. We were sure of it,” says Lahiri.

On March 2, 2020, ahead of the Janata curfew and the surge in Covid-19 cases during the first wave, the national convener of the IT cell of the Bharatiya Janata Party, Amit Malviya took to Twitter and wrote, “Umar Khalid, already facing sedition charges, gave a speech in Amaravati on February 17, where he exhorted a largely Muslim audience to come out on streets in huge numbers when Trump arrives in India on 24th. Was the violence in Delhi planned weeks in advance by the Tukde Tukde gang?”

Umar Khalid, already facing sedition charges, gave a speech in Amaravati on 17Feb, where he exhorted a largely Muslim audience to come out on streets in huge numbers when Trump arrives in India on 24th.

Was the violence in Delhi planned weeks in advance by the Tukde Tukde gang? pic.twitter.com/feUMwpPeKS

Since then, the lives of Umar and his close aides, including Lahiri, have been shaped by anxiety, apprehension and anger.

In 2020, Lahiri was in Kolkata when the news reached that Umar Khalid has been named in the FIR of Delhi riots along with Safoora Zargar, Asif Iqbal Tanha and others.

“It was Asif’s lawyer that informed us about Khalid’s name in the FIR,” recalls Lahiri, adding, “But no communication was done from Delhi Police in this regard until August 1.”

Since then, life has been mostly about looking forward to the brief sessions exchanged over calls and videos between the two spaces -- the world outside and the world inside.

“Those 15 minutes of call in the week are all we look forward to. That’s a weekly reunion for us. We have so much to talk and share, but time is an evil constraint,” laments Lahiri. And most calls begin with, “What do we tell Umar in that brief time so that he is happy?”

When the Covid-19 cases had dropped, Lahiri was allowed to meet Umar once a month in Tihar jail for 30 minutes, through a glass wall. Then eventually, with the easing of the Covid-19 restrictions, the meetings became twice a month. However, with the third wave causing a scare, from January, this year, meetings have been made virtual. The calls over the screens are twice a week now with friends and families for 15 minutes.

“I, desperately, look forward to the calls. We coordinate with other friends, who join, and mostly the meetings are around jokes, light banter and mellow conversations,” Lahiri says.

“Often, when the meeting starts, we are excited with so much to talk about. But in no time, he says: ‘Chalo chalo time khatam ho gaya’ (Time’s over, hurry) and there are police keeping roaming behind," sighs Lahiri.

With so little time, and so much to talk about, the friends often have to prepare beforehand, what needs to be shared over the intermittent calls, now that it has become a regular “exercise”. And when the time strikes five minutes, the call drops anyway.

“Five minutes are never enough. The call often gets cut in mid-sentence, and that moment becomes quite shattering,” Lahiri expresses in a low voice.

Back in 2021, when the deadly second wave was snatching away our loved ones, the news of Umar’s sickness left Lahiri helpless. “I felt so helpless. So helpless. Imagine, he was languishing inside the prison whereas I could not do anything. What if we lost him?”

However, Lahiri says that Umar is a very strong person and probably that is why his strength and stubbornness to win the battle has kept everyone going.

“I have known Umar since 2008 and I know his strength. We would visit Jamia Millia then, during the Batla House encounter and talk to students. Back then he was pursuing History honours at Delhi University and I was doing my MPhil from JNU. And he has always been very spirited about his vision for democracy,” says Lahiri.

However, it’s now just a matter of hope, Umar and his friend are hanging on, to get him bail.

“Someday it will get over. We cursed 2020. And in 2021, we hoped it would be a better year for us and Umar. Now we move forward to 2022, with the same hope again. I have my faith in the Indian judiciary and it’s a battle for the Constitution which we know will be tough. I have made peace with it,” adds Lahiri.

When it gets difficult with the pandemic, court proceedings and the distance, Lahiri often imagines the day when Umar is free and they are watching The Trial of the Chicago 7 together.

And when she misses him, she goes back to Faiz Ahmad Faiz:

(A few more days, my love, only a few days more

It is our lot to live under the shadow of tyranny

To suffer this outrage, to bear this pain, to weep awhile

This legacy of our past is our cross to bear)

“Few people have to pay the larger price for the fight to freedom. And that’s Umar for me,” smiles Lahiri.