In the third part of her 4-part series, poet and activist Meena Kandasami continues reporting from Ground Zero of an unfolding grassroots movement in Tamil Nadu that has escaped the attention of mainstream media. 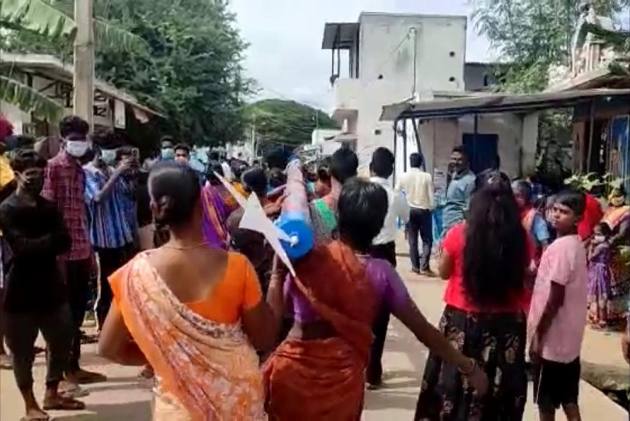 Pudu Viraalippatti is not an isolated incident in which the VCK has had to resort to a peaceful struggle to hoist their flag in a public place. In August 2020, there was a similar stand-off in S Melapatti village, Peraiyur, Madurai district. In January this year, when VCK erected a flagpole and hoisted their flag in Usilampatti in Madurai, caste-Hindus led a road block and other protests. Police and revenue authorities eventually gave in to these demands, uprooting the VCK flag on January 28. To appear neutral, they also removed the flags of AIADMK and Communist parties. Neither AIADMK (the ruling party at that time), nor the Communists, launched a protest for their own democratic right to fly party flags at the public bus stand. That would mean VCK would enjoy the same rights, and they did not want to upset oppressor caste sentiments. Instead, they were willing to forego their own public visibility if it meant VCK would have to forfeit the right.

A similar struggle is now unfolding in Morur village, near Kadayampatti, Kanavaiputhur panchayat, Salem district. I spoke at length to A. Vasanth, VCK Salem (North) district secretary who has worked for 22 years in the party. VCK cadre had organised a flag-hoisting ceremony at the Morur bus stand on Periyar’s birth anniversary (September 17), in which the party’s president and Chidambaram MP Thirumavalavan was scheduled to take part. Velpanidyan, the party’s local secretary, had applied for police permission for the event. On September 14, VCK members dug the foundation where the flag was to be hoisted and laid the pipe which will hold the flagpole. According to Vasanth, on the morning of September 15, VCK was intimated that there was objection to the VCK flag. When asked to name the specific people who were raising objection, the village administrative officer (Ambedkar Maadhu) refused to name anyone, merely saying it was PMK and Vanniyar people who were opposed to it. Police and revenue officials played the bureaucratic game of passing the buck. The site at Morur already had a PMK flag, a Vanniyar Sangam flag (a caste association of dominant, oppressor caste Vanniyars), a DMK flag and a flag of actor Vijayakanth’s party DMDK. This site is barely 200 meters away from the cheri, and according to A. Vasanth, the original land for the village bus stand itself was given by the people of the cheri in the late 1930s. He reasons this is one more reason why the Dalit women of Morur were in the forefront of the struggle to hoist the VCK flag. “The party has to recognise their feelings, we have to respect them when they claim their rights.” He cites the example of 65-year-old Govindammal of the village, who argued that not only was the land for the bus stand given by Dalits, but even the land on which the nearby government school stands was also given by Dalits.

When contacted by VCK, the PMK MLA R Arul, representing the Salem (West) constituency under which Morur village falls, had said he was unaware of any such objection from his party. He said they were not involved. On September 15, VCK made another representation to the BDO and revenue officials who promised to look into the matter.

The following day, VCK functionaries Paavendhan, A.K. Arjunan and Velpandiyan give a representation to the district collector, who says the land belongs to the highways department, and that he will talk to them to ensure permission is granted. On September 17, the event was cancelled. At the same time, the DSP sent across a letter denying permission for the flag hosting. A few days later, people of Morur informed A. Vasanth that the VAO had removed the foundation of the VCK flagpole, an allegation which the administration denied, until they were confronted with video evidence. For another week, the Panthers were kicked around between the police, highways department and revenue officials. Unlike in Pudu Viraalippatti where the administration at least went through the charade of two peace committee meetings, in Morur (Salem), nothing of that sort happened.

On September 22, permission requested by VCK for a flag hoisting ceremony the following day was denied, and notice was served to everyone concerned for removal of their flag in a week’s time. According to Vasanth, VCK representatives maintained they had never demanded the removal of anyone’s flag, and that they had also argued that if all flags will have to be removed in a week, let the VCK flag at least fly for that duration.

On September 23, more than 300 Dalits from Morur, including a large number of women, started a sit-in protest demanding their right to hoist their flag. They started the agitation within the cheri itself. According to Vasanth who was on the spot, Dalit women were pushed around by police but they stood their ground. He admits that VCK functionaries had to stand back unable to restrain the people’s resurgence. He also points out the original flag pole weighs more than 100 kg, and the women of the cheri who were at the forefront of the protest carried a smaller flagpole in order to erect it and hoist the flag. “There was a pre-planned conspiracy. Soda bottles and stones started to fly at the people of the cheri. A gang had been hiding in the school premises overnight. In order to save the people, we advised them to withdraw into the cheri,” Vasanth says. Around this time, SP Sree Abhinav arrived on spot with a police force. According to eyewitnesses, he physically roughed up VCK’s spokesperson Pandiyan, and issued lathicharge and arrest orders. More than 20 Dalits sustained severe injuries in the lathicharge and were admitted to the Omalur Government Hospital for treatment. Many of the women bore the brunt of the violence, which I learn had also involved stamping, hitting with force and other forms of humiliation.

The police arrested 17 Dalits who are now lodged in Athur jail. Those arrested from oppressor castes have been lodged in the Dharmapuri jail. On September 27, police brought in earth movers to remove all party flags that were flying near the Morur bus stand. There was not a single murmur of protest from any of the other parties.

The VCK announced agitations in Chennai, Salem and Madurai to condemn the events. The agitation at Chennai took place on September 28, while those at Salem and Madurai were postponed at the last minute following an intervention from the office of chief minister M.K. Stalin, who also handles the police portfolio. He also promised to have the issue investigated.

In other districts, the battle to hoist the party flag has lasted for several years or met with more tragic endings. Young Dalit men have paid with their lives to claim this right. In 2018, 24-year-old Aravindan of Tiruppattur was murdered by his employers because he hoisted the VCK flag. In Rajagopalapuram in Virudhunagar district, VCK functionaries and the people of the cheri have had to fight a long-drawn legal case from 2015 to get permission to erect the party flag in a faraway corner of their own area—not even in the commons. They won their right legally in 2021, and party leader Thol. Thirumavalavan hoisted the flag this September. In Ramanathapuram, a local SP is said to have thrown an open challenge to the VCK: “As long as I’m the SP here, not a single VCK flag will fly.” This is a reminder that police forces reflect the societies from which they emerge, and that they will unflinchingly use their power to uphold the status quo in the name of maintaining peace and harmony.