The fact that the party retained Assam with an emphatic win did not lift the air of despondency among the BJP leaders. 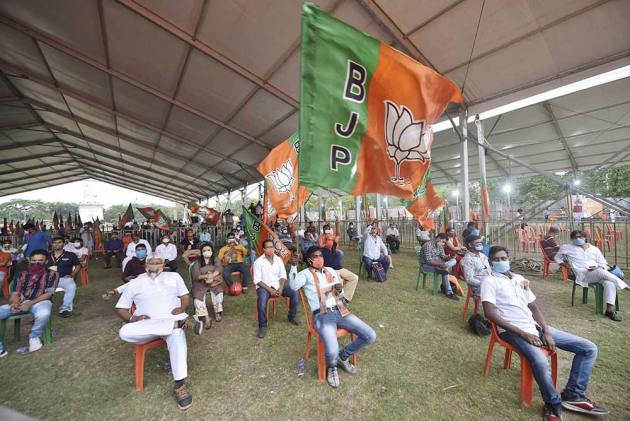 The victory in Assam and Puducherry did not make up for the huge loss that the BJP faced in West Bengal as the feisty Mamata Banerjee led the TMC to a historic third-term win.

As the results trickled in, it became clear that the BJP will not reach the three-figure mark. The fact that the party retained Assam with an emphatic win did not lift the air of despondency among the BJP leaders. However, a decision was taken that the party is not going to be on the backfoot but will play up the gains it has made in a state where it had no base till five years ago.

For Mamata, who picked up the gauntlet and defeated the “outsider” BJP, it is a bitter-sweet win as she lost her own seat from Nandigram to her protégé Suvendu Adhikary, who had joined BJP before the elections. She later said, she accepts the Nandigram verdict – “It is okay I have lost. The bigger thing is BJP lost the elections.”

While one big takeaway of the Assembly results is that the BJP’s formidable election machinery can be defeated by a strong determined opponent as seen in West Bengal; the other is that Congress is definitely not in a position to challenge the might of the saffron party as the Assam results show. With the battle in West Bengal becoming bipolar, Congress and the Left have nearly been decimated in the state, as most of their votes seem to have gone to the TMC.

The victory for Mamata -- wheel-chair bound for most part of the polarising, vitriolic campaign -- is more significant since she was up against Prime Minister Narendra Modi’s perceived charisma -- who addressed 20 rallies in the state including during the middle of the Covid-19 pandemic -- home minister Amit Shah’s strategic guile, J.P. Nadda’s political machinery and the combined strength of the biggest political party in the world.

Shah had extensively travelled in the state over past two years, covering each district, and had addressed as many as 50 public meetings while on the campaign trail. The party had unleashed all senior ministers and chief ministers including Yogi Adityanath to campaign in the state. The party gave its all.

And, according to her party members, Mamata also had to contend with the state’s might against her, including the CBI, Enforcement Directorate and the Election Commission of India. Senior leader Derek O’Brien tweeted soon after the voting trends were established in favour of TMC – “An emotional day after fighting the world’s most destructive force, MO-SHA’s BJP. Filthy campaign aided by agencies and shameless EC. A momentous day for India & Bengal. It is understandable that we are euphoric but we also know that during Covid we have to celebrate responsibly.”

The BJP leaders, on their part, put up a brave front, claiming there is no embarrassment in the West Bengal loss, considering the party had won only three seats in the 2016 polls. “The fact that we have won so many seats and emerged as the principle opposition party in the state reflects our audacity of ambition,” says BJP’s IT cell in-charge Amit Malviya. His entire team and the social media team had relocated to Kolkata in the run-up to the elections. According to him, the BJP has caused a “tectonic ideological shift” in West Bengal.

However, neither Malviya nor any other BJP leader could justify the huge claims of “winning over 200 seats” that were repeatedly made by Shah. “We can claim huge gains as compared to 2016 but the fact remains that the results are not proportional to the hard work and effort put in by the party. Mamata was up against anti-incumbency of 10 years but yet we could not take advantage of the visible discontent against her. A lot of our strategies seem to have backfired. Probably, the aggression displayed by our leadership did not go down well with the people of the state,” says a senior party leader.

The attempts to polarise, the chants of Jai Shri Ram used to taunt Mamata Banerjee and the persistent call of ‘Didi O Didi’ made by Modi during all his speeches were probably not appreciated by the voters. “The problem is that the PM and Shah start believing their own narrative to be true, and tend to become arrogant. It evoked sympathy of people towards Mamata. And her counter of ‘Bengal ki Beti’ probably worked better,” the leader adds.

BJP’s West Bengal in-charge Kailash Vijaywargia has another theory about why the party failed to perform as expected. “The Left and Congress surrendered before the TMC to stop the BJP,” he says. According to him, the BJP was doing very well in the first four phases but then the opposition parties decided to gang up. “Rahul Gandhi announced he won’t be holding any more rallies. Sharad Pawar called for the Opposition to come together. Also, Mamata Banerjee’s letter (on March 28) calling for opposition unity also added to their coming together. The possibility is there,” he claims.

Mamata had written a letter to the leaders of opposition parties raising the issue of federalism and also how central agencies like the ED and CBI were being used in poll-bound West Bengal and Tamil Nadu to target TMC and DMK leaders.

Vijaywargia adds that the spread of Covid-19 may also have played a part in the later phases as the middle class and the upper-middle class voters did not come out to vote.

It is evident that the BJP is in no mood to be on the defensive. As it was clear that the TMC would sweep the elections, BJP Rajya Sabha member Vinay Sahasrabuddhe tweeted – “Whatever happens in W.Bengal, let’s not forget that @BJP4India is the only challenger to autocratic @MamataOfficial. Communists and @INCIndia have been rejected LOCK, STOCK and BARREL. @ECISVEEP (Election Commission) must give protection to our candidates/workers fearing bomb attacks from @AITCofficial.”

Not the ones to give up, a senior leader close to Shah says that these elections were about establishing a base in the state. “Wait for the next ones. Mamata and TMC will be history, like the Congress,” he claims.

The Congress, in addition to losing in Assam and Puducherry, could not make any impact in Kerala despite Rahul Gandhi campaigning extensively in the state and trying to establish a connect with the youth. Bucking the 40-year trend, chief minister Pinarayi Vijayan is set to lead the LDF to a second consecutive victory. His government’s adept handling of the Covid-19 pandemic is believed to have contributed to the win. The BJP has not retained even the single seat it had in the state.

The only saving grace for the Congress is being on the winning side in Tamil Nadu, where it is a junior partner in alliance with the DMK, which is on its way to a convincing victory in the state. It may take the BJP – still seen as the ‘Hindi, Hindu, Hindustan’ party south of Vindhyas – to make significant inroads into Tamil Nadu and Kerala. Though it has the slight satisfaction of having got a toehold in the neighbouring UT of Puducherry.