After Narendra Modi ended his remarks, BJP president Amit Shah gave a detailed report card of the campaigning as well as the performance of the NDA government. 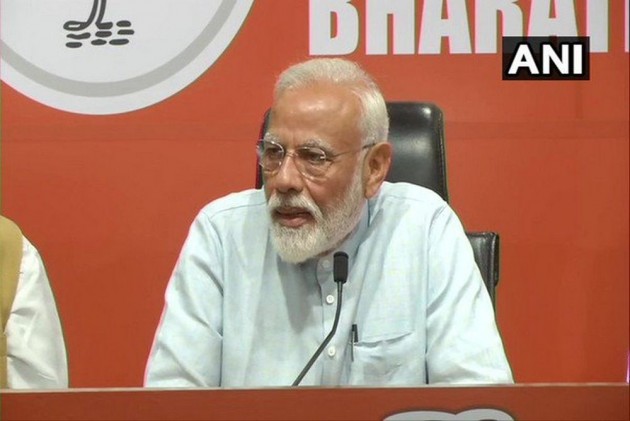 Soon after he landed in the national capital from Madhya Pradesh, Prime Minister Narendra Modi had some time before winding up the prolonged campaign on Friday. The silence period before the last phase of voting on May 21 was to come into force at 5 pm.

BJP president Amit Shah is believed to have suggested him to come to the party headquarters at Deen Dayal Upadhyaya Marg and join him at the press conference he was scheduled to address at 3.45 pm. “The aim was to show a relaxed Prime Minister at the end of a hard gruelling campaign -- someone who is self-assured, confident of victory and raring to go for another term,” reveals a senior BJP leader, who was present at the party office.

However, several party leaders admit that the final result did not come out as they would have liked. As the PM sat next to Amit Shah, taking a backseat to the party president – “I am a disciplined soldier, party president is everything for me” – he did not take any questions. Modi, projecting himself as a BJP worker, at a rung lower than the party president, did not go down well either with the party leaders or the public. It triggered several memes and comments on social media.

Among the first questions that were thrown at the PM was one on Pragya Singh Thakur’s “deshbhakt” (patriot) remark on Nathuram Godse. The question was passed on to Shah, who said that "the PM need not answer," and went on to say that a show cause notice had been issued to her.

Even Congress President Rahul Gandhi, who was addressing a press conference at the same time as Shah, took to twitter later – “Congratulations Modi Ji. Excellent Press Conference! Showing up is half the battle. Next time Mr Shah may even allow you to answer a couple of questions. Well done!”

Congratulations Modi Ji. Excellent Press Conference! Showing up is half the battle. Next time Mr Shah may even allow you to answer a couple of questions. Well done! ð

So, Amit Shah addressed the press conference and PM Modi attended it. However, he did make one final statement before signing off the campaign. He summarised the two-month long campaign and said that by the end of it, he was confident of coming back to power with a full majority -- “It has not happened often in our country that a government with full majority returns once again with a majority.” He said that his government would start work on the promises made in the manifesto “once we come to power again.”

Having made his statement, PM Modi sat as a spectator at the press conference, as Shah fielded all questions. Asked what his government’s biggest regret was, Shah responded -- “It is that you [the media] are not on our side. That you have not been convinced by our performance.” The Prime Minister just smiled.