The perceived social stigma against people with mental illness which leads to avoidance of such patients has actually saved schizophrenics from Covid-19. 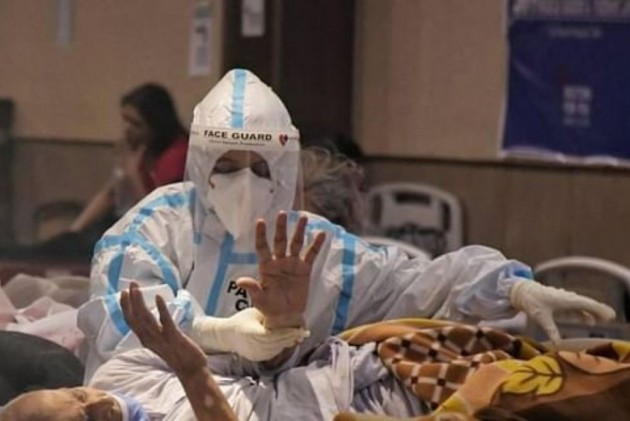 The hospitalization of a schizophrenic patient for his anti-social acts has led to ongoing research at Kashmir’s Institute of Mental Health and Neurosciences (IMHANS) about the resistance of schizophrenics to the Covid-19.

At the peak of the Covid-19 pandemic last year, the J&K administration asked IMHANS to admit a schizophrenic for his alleged blasphemous act.

To avoid street protest against him when social distancing for controlling the Covid situation was the government’s priority, the young man from south Kashmir’s Khanabal area was admitted at the IMHANS.

The IMHANS was the only government hospital in Jammu and Kashmir that was regularly seeing the OPD patients and had kept admissions open. But hospital protocols were devised in a way that all admissions were done in open wards with one attendant while closed wards were kept off bounds for new patients fearing the spread of the virus as had happened in many institutional care facilities the world over leading to high mortality and morbidity.

The doctors made a special exemption in this case.

He was isolated and quarantined for five days and after that, his RT-PCR was done which tested negative.

During his first five days at the IMHANS, the hospital administration ensured that he shouldn’t come in contact with other hospital staff or patients. Only doctors and helpers, who were following the Covid appropriate protocols, were allowed to see him. Until then there were no such guidelines. Later when the guidelines about isolation were issued they were exactly the same. That after isolating a suspected Covid-19 contact for five days his RTPCR should be done to rule out the infection.

“He was not infected with Covid-19. We admitted many more patients suffering from schizophrenia after that and all of them were negative when tested. Most of these cases were homeless, neglected and disorganised cases of Schizophrenia. They would live on streets, hide inside hospitals, go from one place to another, and wouldn’t follow any Covid appropriate behaviour. Many of them were caught by the administration fearing they might spread the infection. But none of them tested positive on admission and five days after and none of them had antibodies evidence of the previous infection,” says Dr Arshad Hussain, Professor at the Department of Psychiatry, Government Medical College Srinagar.

“Even though this was an important finding in our pandemic work we have not yet published it, we hypothesise that the inward-looking autistic loneliness and social isolation protected them from Covid. Schizophrenia is known to create social disconnectedness among those who suffer from it. And usually, people don’t go near them, either out of fear or out of stigma. Even people suffering from schizophrenia and living in homes had a lesser prevalence of schizophrenia,” says Dr Arshad.

“One schizophrenia patient was living inside the SMHS hospital. The SMHS was a Covid-19 designated hospital and hundreds of Covid-patients were admitted there. This case was brought to our hospital and when tested he was negative,” says Dr Arshad.

Dr Arshad says it was observed that schizophrenia patients, whether homeless or otherwise seem less likely infected by Covid-19. “It shows that social distance, stigma and isolation felt by severally mental ill and detested by us as psychiatrists came as a blessing in disguise for them during a pandemic.”

“There has to be a sense of empathy with them. They should be kept in families. They need love and care. We found it missing but it protected them from contracting Covid infection,” he adds.

The hospital not only saw schizophrenia cases but thousands of others in the peak of Covid-19 when people feared to step out of their homes. Young adults were reporting rising levels of anxiety and depression. The doctors say they saw a sharp increase in panic attacks and a number of Covid-19 patients developing severe psychotic symptoms when most of them had no history of mental illness.

On March 18, 2020, as the number of Covid-19 patients started soaring and fear gripped all across J&K like in other parts of the country, senior government officials visited the hospital to designate it as Covid-19 hospital as it did with all other hospitals across Jammu and Kashmir.

The Postgraduate Department of Psychiatry of Government Medical College Srinagar runs a full-fledged hospital for psychiatry care at the Institute of Mental Health and Neurosciences, Kashmir, at Badamwari Rainawari and a 30-bedded hospital of Community General Hospital Unit inside premises of the SMHS Hospital with more than 80 mental health professionals.

The department of psychiatry is the largest tertiary hospital in the Kashmir valley and caters majority of the population of Kashmir, Ladakh and adjoining areas of Jammu. The bed strength of the IMHANS is 200, including the Community General Hospital Unit which is situated in the main hospital of Government Medical College, Srinagar (SMHS). The government thought it would be best to turn it into Covid designated hospital.

However, the doctors opposed the government’s move, arguing it will be devastating for psychiatric patients as they will have no place to go. The government allowed the hospital to function normally.

But what was the need for the doctors to keep the facility open?

The IMHANS has done a community prevalence study of mental illnesses in 2016 that reveals higher mental health morbidity in the region as compared to the rest of the country. There has also been a study done by Medicine Sans Fronteires which did not classify the findings in terms of disorders but stated that levels of despair, unhappiness and hopelessness were present in 34% of the population. Kashmir Professor in the Department of Psychiatry, is already known as mental health crises zone due to decades of low-intensity conflict.

From March 19 the doctors started working with self-devised Covid protocols which included seeing patients from more than two meters distance, never without a mask with open doors and windows of OPD cabins. In case a patient was to be examined physically or a patient couldn’t wear a mask because of any reason he or she would be directed to a ward where doctors were in full protective gears ready to examine.

In spite of the lockdown, within one month each day around 400 to 500 people were visiting the hospital. It was double the normal number of patients they would see before the onset of Covid. Everyone, who had psychiatric treatment in different parts of the country and the world, would visit IMHANS for the treatment as it was the only hospital open. The doctors treated every patient coming to the hospital as an emergency. Though it wasn’t an ideal situation for the patients in the hospital, they got treatment most of the patients were happy about being cared for in such difficult times. They also complained about distance, lack of clarity in voice because of masks and face shields. Every morning patients were screened first at a registration counter with distancing norms and those without masks were provided masks donated by NGOs or from hospital supply. At the registration, every patient was assigned a separate room for a consultation where doctors were ensuring three meters distance.

The hospital also did electroconvulsive therapy (mECT), also known as modified Electroconvulsive therapy, which is a well-established psychiatric treatment in which seizures are electrically induced in anesthetized patients for therapeutic effect. A patient suffering from lethal catatonia, a life-threatening febrile neuropsychiatric disorder, was given the ECT and she survived. The doctors say it happened at the peak of Covid-19 in May 2020. “That girl is not only living but is getting married this year,” says Dr Hussain. This happened when ECT treatment was shut the world over as there was apprehension such procedures would generate aerosols and spread Covid. The doctors kept windows and doors of the theatre open during the procedure and later a year after such guidelines were issued about keeping windows and doors open during procedures.

Even in the most advanced countries, there was no outpatient department for psychiatric patients. But the hospital was open for not only psychiatric patients and even admitted patients in its de-addiction facility. The de-addiction services saw hundreds of IV heroine users admitted. They would have died of overdoses on roads if we had not kept services open, says Dr Yasir Hasan In-charge addiction unit.

Dr Zaid says they don’t want to be remembered as the Covid warriors but he insists that there should be institutional recognition of the work done by the hospital. He says there was a group of doctors who were regularly coming to the hospital to treat patients when others preferred to be at home.