People from the North-East living in Delhi often face racial profiling, discrimination, difficulties in getting jobs or safe housing. 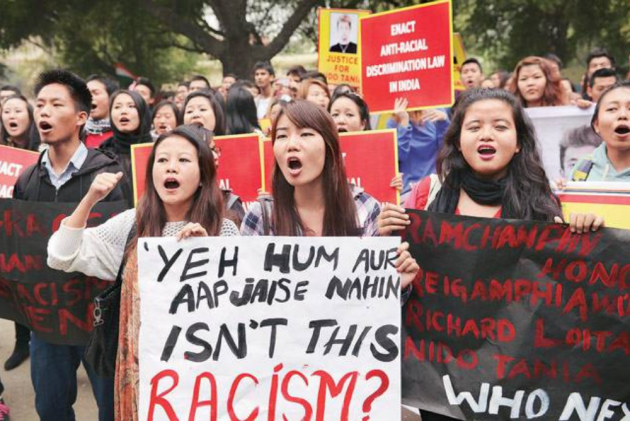 About three years back when Ebungo (name changed) was looking for a place to live in Delhi’s Munirka village, he was refused accommodation because he was a Manipuri.

“The caretaker asked me where I was from. When I told him I was from Manipur, he said the landlord did not rent his place out to people like me,” he said.

This sense of alienation among northeasterners has grown due to the radical demographic shifts in the region ravaged by insurgency over decades.

In order to safeguard their ethnic identities, local factions across different states have revolted against migrant influx into the region as well as the representatives of the State including the armed forces.

Once very active, insurgency however had mellowed in the region over the years, as more negotiations with the government took place over efforts to include the region in policies aimed at its betterment.

Malpractices on the part of some insurgent groups that began resorting to extortion of not just migrants but also indigenous people to further their own agendas also resulted in the loss of local support for these groups over the years.

However, the recent incident in Nagaland’s Mon district where 13 civilians were killed in a botched army ambush has opened up a festering wound.

The dearth of education and employment opportunities in the region has been pushing north easterners towards metro cities like Delhi for several years now, and over time Delhi has emerged as a home to several localities dominated by large populations of people from the region like Munirka village, Humayunpur and Mukherjee Nagar.

Ebungo came to Delhi in 2015 to study, after which he took up a job at a call centre.

Having been a victim of racial profiling, he says he somewhat understood the origins of insurgency in Manipur and other north-eastern states.

“The insurgent groups want to mark their own identity. They want their voices to be heard, because the government for years has been taking over their lands, but since negotiations started happening with the government, the incidents have reduced,” he said.

He however adds that the role of the armed forces was crucial in the region too.

“There are times when the army helps resolve internal conflicts of the region, like in Manipur where there’s perpetual tension between the hill tribe (tribals), and the valley people (Hindu majority population),” he says.

As the tussle between the insurgent groups and the armed forces continue over the years, it is often the local innocent people going about their regular lives who are caught in the crossfire.

Like the innocent civilian lives that were lost in the incident in Mon.

“The army needs to be careful about making such mistakes. This might trigger some extremist groups to resort to violence,” says Ebungo.

Kim was practically driven out of her hometown Kangpokpi in 2016 due to the rampant extortion by insurgent groups in Manipur.

“You know why I left home? Because of insurgency,” she says promptly, while walking the lanes of Humayunpur where she currently lives.

Back home, her father is a well known businessman, who has repeatedly been a victim of extortion at the hands of insurgent groups despite being a local.

“May be they have a reason or goals to achieve, and I totally support it, but do they really do it? My dad’s a businessman and we keep getting demands for more money in envelopes. They use that money to build their own big house, and buy a big car. I haven’t seen any development.. any changes till now. So I left my hometown because of that.

Migrants placed in government jobs in these states continue to live in fear of threats and extortion by insurgent groups as well.

Anusha Chettry is Nepali by birth but identifies as a Mizo having been born and brought up in the state. She moved to Delhi in 2011, hoping to bring along her family as well some day.

The decision was triggered by an incident in 2005 when her uncle who was an engineer in the Meghalaya government was threatened to give Rs 12 lakhs or he could be harmed fatally.

“You have used enough resources of our state Meghalaya for many years. It is now time that you pay us back. Arrange Rs 12 lakhs within three days and send it to this address. Failure in doing so will only lead to deaths in the family.’ The letter did not have any name or sign, but a bullet taped on it,” she says.

She has not visited her uncle’s place in almost 15 years now.

“We were afraid of receiving similar threats or getting abducted on the way like many officers and families were abducted and killed. Whenever I hear or read of violence back home, my first thought is, ‘How can I get my family out of there?’,” Anusha, who currently lives in Noida said.

Fearful of similar incidents in Assam, Nishita Bhattacharjee left her hometown Tinsukia six months back in hope of a safe and better future in Delhi.

Currently working as a receptionist in a laundry shop within the Jawaharlal Nehru University campus, she is looking to apply for a course at the university in the coming academic year.

She says she had grown up hearing about incidents of abduction by the United Liberation Front of Asom (ULFA) back home.

Recalling an incident from earlier this year, when two employees of Oil India were kidnapped by the armed separatist organisation and held hostage for ransom, she says, “in my hometown, there are coal mines all around. Who will disappear when, nobody knows!”

The Indian government’s “step-motherly treatment” of the northeast is to blame for the tension within the region, feels Gideon Kamei, a Naga, living in Delhi for over two decades now.

“The government has to be sincere in its approach towards addressing the grievances of the region. The government is celebrating ideas of ‘India Shining’ etc, but the north east is being left behind in development. So many of these border states could have been transformed into trade hubs like Mumbai or Hong Kong,” he rues.

Kamei is the founder of a Delhi-based education NGO called Potter’s House Academy that works for the welfare of youth, particularly North East Youth migrants

Talking about the killings in Nagaland, he said that it wasn’t simply the incident that had the potential of fanning another bout of insurgency in the region, but also the treatment of it.

“It is not just the incident but also how the government handles it. The government has to at least own up to their mistake. It needs to contribute to the process of healing of the people. Had a similar incident happened in Delhi or any other part of the country, ministers would have flown in in no time, but which union minister went to Oting?” Kamei asks.

“This only alienates the region and its people further. You can give material compensation and economic packages, but where is the human touch?” he adds