With BJP's eyes set on the upcoming bypolls for Mandi Parliamentary constituency and Himachal Pradesh Assembly Elections in 2022, JP Nadda's visit to ex-CM Virbhadra Singh was more than simply a social call. 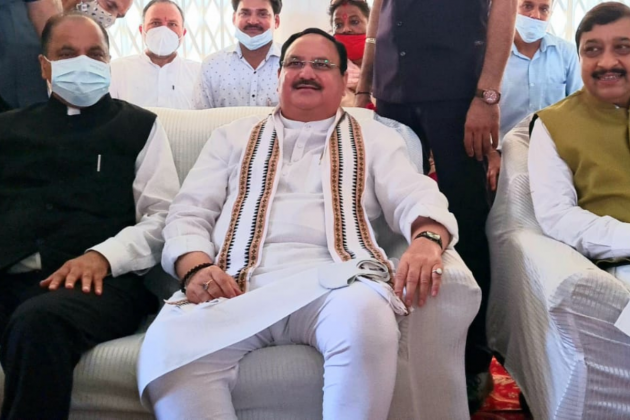 BJP President JP Nadda's visit to the ailing former Himachal Pradesh chief minister Virbhadra Singh is unlikely to simply be a social call. Yet, the gesture certainly holds quite an importance, especially when the BJP has set its eye on upcoming bypolls for Mandi Parliamentary constituency, and later next year the assembly polls in Himachal Pradesh—a ‘mission repeat 2022’ as the party calls it.

Of three byelections, two of these for the state assembly seats and Lok Sabha constituency of  Mandi, a seat had fallen vacant due to the demise of two-time MP Ram Swaroop Sharma which may hold the key for BJP’s return to power in 2022 .

Mandi is the home district of Chief Minister Jai Ram Thakur –a first time Chief Minister, and it is here that Virbhadra Singh has also cultivated his political might, having  himself represented Mandi as MP and union minister, apart from his wife Pratibha Singh elected twice. The veteran Congress leader has support, influence and sympathies from the entire region falling under Mandi parliamentary segment.

As being BJP’s national president, Nadda may have acquired an important place in the country’s politics but he has seen how efforts to sideline Virbhadra Singh by both the ruling BJP or even a determined Congress high command had rather proved futile .

Thus, the BJP never got a chance to return to power, after every five years of its rule.  But now things may change for the BJP  in Virbhadra Singh's absence from the field.

Even if his ailing health remains a worry for the Congress to fight back to power with a face to lead it to the next polls, the BJP has time and again sent signals that its government and even party leadership acknowledge the stature of Virbhadra Singh and his contributions to the state.

The Chief Minister, who paid frequent visits to the former CM at the hospital, had offered a state government helicopter for Virbhadra Singh’s return from Chandigarh after being discharged from Max hospital, Mohali where he was taken for his Covid treatment in April 2021.

Nadda made a sudden change in his programmes and arrived in Shimla to meet family members of Virbhadra Singh and doctors attending on him.

“Virbhadra Ji as we know is a bold person. He has very strong willpower that is perhaps his strength. We hope and pray for him to fight back play his role for the people of the state, as he always did," Nadda said at the hospital, admitting that ex-CM’s health conditions did not permit meeting him.

The 87-year old Singh—who was Congress’s grand old player in Himachal Pradesh with his mass base is almost on the last leg of his 60-decade political inning. With his ailing health and two times Covid-19 infection, Virbhadra’s prolonged hospitalisation is certainly a worrying factor for the family.

His son Virbhadra Singh, a sitting Congress MLA, has been posting regular updates on his father’s health condition on his Facebook.

As per worrying information received earlier in the morning, Virbhadra Singh’s oxygen has dipped in the past 24 -hours and he has been given ventilator support. “The condition is definitely not good, and worrisome now,” said a senior doctor