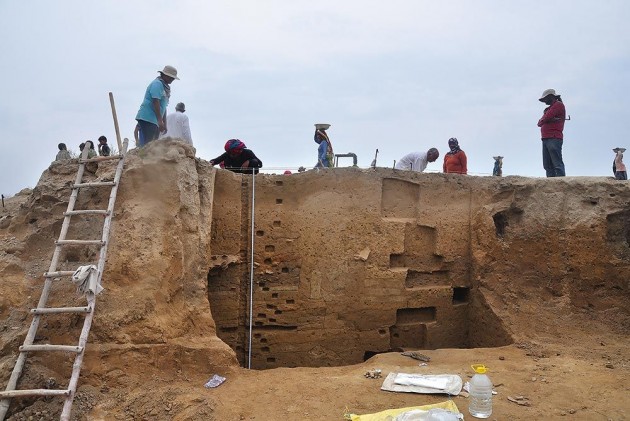 A press conference in New Delhi this morning, held to explain the findings of a much-awaited genetic study published on Thursday, saw some contentious themes in history being revisited. In a surprising twist, scientists put forth a version of the controversial ‘Out of India’ migration theory (OIT) while describing the conclusions of their DNA-based research on Rakhigarhi, a key Harappan site in Haryana that has generated much interest of late.

As an extension of OIT, they also attempted to talk down the ‘Aryan’ migration theory -- the widely held idea of a movement of Steppe-origin people into the subcontinent circa 2000 BC -- saying India has always been an indigenous population. This sits ill with an old consensus among historians and anthropologists (bolstered by brand-new genetic studies) that likens the Indian population to a melting pot with great genetic diversity over millennia.

The press conference at the premises of INTACH in the capital -- chaired by Prof Vasant S. Shinde, senior archaeologist and vice-chancellor of Deccan College, Pune, and Niraj Rai, head of the Ancient DNA lab at Lucknow’s Birbal Sahni Institute for Palaeosciences -- was meant to address and explicate the paper the two have co-authored. The paper itself, titled “An Ancient Harappan Genome Lacks Ancestry from Steppe Pastoralists or Iranian Farmers”, published in the journal Cell, went online just prior to midnight on September 5.

In a packed hall, the interaction was wide-ranging enough for a question on the ancestry of Ram to pop up -- it was not dismissed by the authors as extraneous to the theme at hand, but humoured. Overall, the emphasis by Prof Shinde, the lead scientist, was on the “indigenous” nature of the ancient Indian population and on its unbroken connection with our present-day population, drawing from pottery to food.

This is the first research endeavour that has analysed Harappan DNA and Prof Shinde told the gathering the paper comes out 100 years after excavation began in 1920 on Harappan sites. Its findings briefly state: “A genome from the Indus Valley Civilisation is from a population that is the largest source for South Asians. The population has no detectable ancestry from Steppe pastoralists or from Anatolian and Iranian farmers, suggesting farming in South Asia arose from local foragers rather than from large-scale migration from the West.”

Other studies have offered the view that interbreeding between incoming Iranian agriculturists and South Asia hunter-gatherers around 8000 BC gave rise to people who likely evolved the Indus cities. This paper seeks to dispel that idea through a novel claim: that late Neolithic Iranians and Indians shared a common ancestry which split over 12,000 years ago. The study itself is based on “an ancient Harappan genome”, the DNA of a woman from Rakhigarhi who lived approximately 5,000 years ago. DNA samples from 4-5 individuals from Rakhigarhi had initially been studied, but Prof Shinde claimed only one was “strong” enough to support firm conclusions.

Also Read: We Are All Harappans

And what are those conclusions? That there was an “indigenous development” of people in what is now India. Prof Shinde said the civilisation began as one of the hunter-gatherers but their progress to agriculture continued apace between 7000 and 3000 BC without people coming in from West or Central Asia. This development was a continuous one and there was “no break till modern times”, he claims, adding “we have deep roots” with a continuity of about 12,000 years, which is a “unique feature” of the Indian subcontinent.
Prof Shinde said the team has both archaeological and genetic evidence to be sure of its findings. “People will always criticise but we made sure both archaeology and genetics are synthesised together,” he said.

Shinde also attempted to discredit the idea of migration from the Steppes, which is believed to have occurred around the decline of the Indus Valley Civilisation, about 4,000 years ago. Such a migration -- or "attack" of outside genes -- would have left behind “material” or “cultural” markers, if not wiped out the Indian gene, he claimed. He did acknowledge the linguistic evidence that suggests a more complex picture but says since the Indus script has not been deciphered yet, it isn’t conclusive.

Coincidentally, another important scientific paper was also published last night -- in the journal Science -- and Prof Shinde is a co-author there. Curiously, it traces a slightly different narrative. Titled “The formation of human populations in South and Central Asia", by Vagheesh et al, the paper examined a much larger sample of ancient DNA. As many as 523 individuals who lived over the past 8,000 years, from Central and northernmost South Asia, were studied under that. Its conclusion on Harappa? "After the IVC’s decline, this population mixed with northwestern groups with Steppe ancestry to form the 'Ancestral North Indians' (ANI) and also mixed with southeastern groups to form the 'Ancestral South Indians' (ASI), whose direct descendants today live in tribal groups in southern India. Mixtures of these two post-IVC groups — the ANI and ASI — drive the main gradient of genetic variation in South Asia today.”

Also note: the Rakhigarhi sample is prior to the migrations of people from the Steppes as documented in Vagheesh et al. The migrations have been dated to the decline of the Indus Valley Civilisation, about 4,000 years ago. The Rakhigarhi woman dates from around a millennium before that.

Rai, who addressed the media later, also spoke in favour of an ‘Out of India’ migration theory (OIT) -- their paper says Iranians and Indians had a common ancestor over 10,000 years ago. “There was a separation from that ancestor population and from that separation we have two groups. One is local and another gave four populations….(Iranian). In fact, we share some kind of ancestry with the Iranians but the ancestral population could be South Asian. We are finding the ‘Out of India’ theory, this proves it because in Shahr-i-Sokhta and Gonur (in Iran) scientists in the west have analysed 25 individuals and they have found that 10-12 individuals show different kinds of ancestry…. When we generated Rakhigarhi data and compared it, these two match completely; the same ancestral gradient. This is giving a hint of OIT. More results are required but at this moment we can certainly say that OIT is probably there,” he said.

The OIT theory has not directly been called so in the paper. It does say that: “Multiple lines of evidence suggest that the genetic similarity of I6113 (the Rakhigarhi DNA) to the Indus Periphery Cline (close to the Indus Civilisation) individuals is due to gene flow from South Asia rather than in the reverse direction.”

Responding to a question from Outlook about the ancestry of the female whose DNA formed the basis of the research, Rai said that the ancestry is a mixture of Indian hunter-gatherers and 'Iranian'. 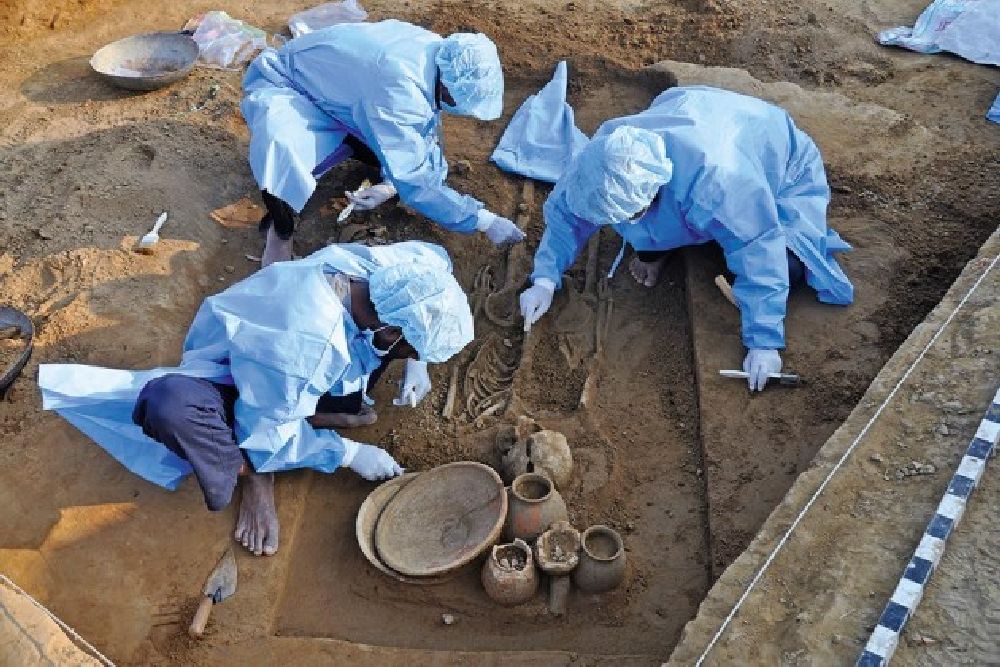 “We don’t know from which region they have moved but we know that they separated around 12000 years ago,” Rai said.

The paper itself also highlights the need for more DNA samples instead of the single one relied upon since the sample of DNA from Rakhigarhi “cannot fully characterise a cosmopolitan ancient civilisation”.

One of the concluding questions from the media summed up the mood of the press conference best: “Sir, could we have bullet points?”