The Story That Has Stirred Rajinikanth’s Darbar

The Tamil superstar had cited a 2017 report from Outlook to justify his remarks on Periyar. 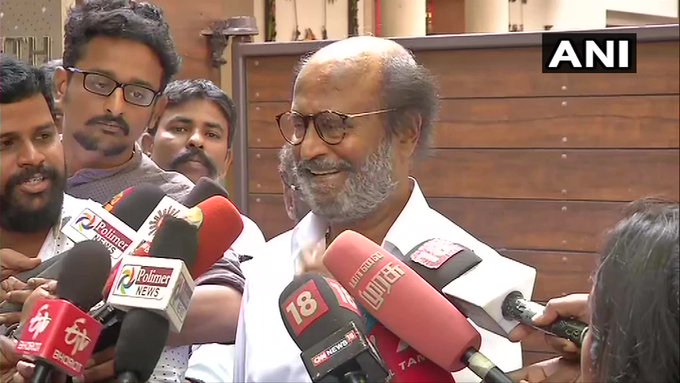 Days after a Dravidian outfit demanded Rajinikanth apologise for his comments on a rally led by Dravidian icon Periyar decades ago, the Tamil superstar on Tuesday said he will neither express regret nor apologise for his speech made at Thuglak magazine’s 50th-anniversary event on January 14.

At the event, Rajinikanth said that in February 1971, the magazine, edited by Cho Ramaswamy, covered a Dravidar Kazhagam (DK) procession in Salem headed by rationalist EVR Periyar in which Hindu Gods “Ram and Sita’s effigies were paraded without clothes, garlanded with footwear”.

Rajinikanth also said that the then DMK government, headed by Karunanidhi, had seized the copies of that issue of Thuglak but a few copies still managed to reach the market. After Rajinikanth’s remarks, many DK leaders refuted any such incident occurred and demanded an apology from the superstar. The DMK and its allies, too, echoed the same.

On Tuesday, Rajinikanth maintained that his remarks were factual and were subsequently reported in other publications. He displayed copies of an Outlook report from 2017 (though he wrongly said the magazine belonged to The Hindu group) on press freedom in Tamil Nadu.

“What I want to say I’ve said. What they want to say they’ve said. There is no question of apology or regret. This is an issue that needs to be forgotten,” Rajinikanth said.

DK leaders, in the process of refuting the garland of slippers, claimed that some Jan Sangh protesters had thrown a slipper at the procession and a DK cadre had used it to hit the Hindu deities with the same, thereby admitting that there had been a denigration. “Where is the need for Hindu deities in a procession on superstition unless the intent was to denigrate them?” said Rangaraj Pandey, Editor of Chanakya channel.

While Rajinikanth’s recollection of the 1971 DK procession in Salem got the goat of the DK and its ideologues, the DMK was piqued by another comment Rajinikanth made at the function. “If someone had 'Murasoli' (DMK’s official organ) in his hand he will be known as DMK man. But if someone had 'Thuglak' he would be known as an intellectual.”

The DMK saws this is an insult to its leaders and cadres and an indirect affront to their intellectual capability. The DMK then had to come out with a front-page story that those who read Murasoli were Dravidian Tamils who cared about the suppressed in the society and those who followed the principles of Periyar, Anna and Karunanidhi.

By reiterating that he stood by his remarks, Rajinikanth has challenged the iconic status of both Periyar and Karunanidhi in the same breath and their anti-God, particularly their anti-Hindu posturing which used to find traction in the past. “It is a courageous step by Rajinikanth since he has questioned some outdated Dravidian ideals that have little relevance now. Even the Muslims and Christians are asking why the DMK and its allies should target any religion?” said political commentator Sumanth Raman.