Home  »  Website  »  National  » Opinion  »  The Surgical Vikas Strike: How BJP Got To The Winning Side Of The Poverty Line
Opinion

The Surgical Vikas Strike: How BJP Got To The Winning Side Of The Poverty Line

In this year's Lok Sabha sweepstakes, it turns out in retrospect that Prime Minister Narendra Modi may have thrown up a game-changer by looking at poverty the right side up, politically speaking. 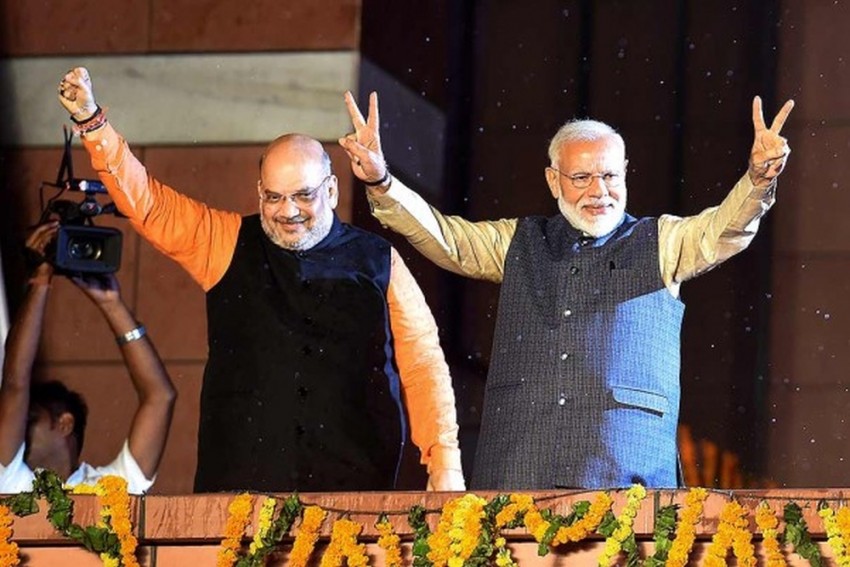 Prime Minister Narendra Modi flashes the victory sign along with the party President Amit Shah, at the party headquarters in Delhi after victory in the Lok Sabha elections
PTI File Photo
Madhavan Narayanan June 03, 2019 00:00 IST The Surgical Vikas Strike: How BJP Got To The Winning Side Of The Poverty Line 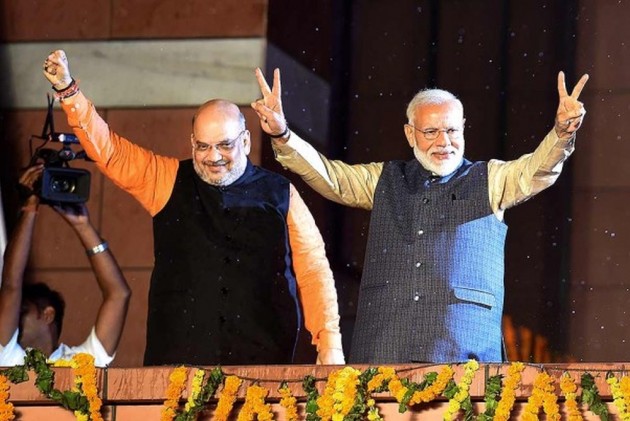 Aspirational poor-- those who may not be absolutely poor but feel themselves to be laggards -- are the likely cause of BJP's big vote surge in its decisive triumph over Congress, which has focused on those struggling for basic needs or livelihoods. In sheer voting numbers, the former trumps the latter, giving Prime Minister Narendra Modi's party a larger potential universe of voters to target, which he did. The Congress may have had its heart in the right place, but the BJP had its eye on the main chance that lay above the poverty line.

In the business of electoral politics, post-facto analysis is a lot easier than predictions, but when poll victories throw up dramatically discernible insights or patterns, there is a case to sit up and take note of what went right for the winner and wrong for the losers.

In this year's Lok Sabha sweepstakes, it turns out in retrospect that Prime Minister Narendra Modi may have thrown up a game-changer by looking at poverty the right side up, politically speaking.

On the face of it, Rahul Gandhi-led Congress played the big populist card with its manifesto that promised NYAY - NyunatamAay Yojana -- that promised Rs 6,000 a month to the poorest 5 crore families in India, or about 25 crore people.

In the eyes of many Congress insiders, the party failed to capitalise on it because the promise came too late and also because it lacked the organisational cadre and energy to convert that into votes. While that explanation may be valid in itself, there is another way to understand how Modi and Bharatiya Janata Party (BJP) may have capitalised on poverty -- that of looking above the poverty line for votes -- from those who may not be truly poor in the eyes of an economist but nevertheless can be politically harvested as poor voters.

Modi has led a campaign to suggest that Congress has kept India poor over seven decades and it was time to fight that, with an accompanying narrative that focuses on corruption and black money. However, hard data shows India has reduced what economists call absolute poverty, defined as not having enough to meet biological needs or basic needs. This is distinct from "relative poverty" that addresses secondary needs.

It is widely believed that Indira Gandhi's "Garibi Hatao" (Remove Poverty) slogan that led to her sweeping success in the 1971 elections was inspired by Pakistani leader Zulfikar Ali Bhutto's call for "Roti, Kapda Aur Makan" (Food, Clothing and Shelter)  that explicitly defined a political slogan in terms of absolute poverty. That seemed to work then, as absolute poverty was common in those years.

It is 48 years since the Congress gave that slogan and there have been nearly four decades of India's economy nearly doubling its infamous average "Hindu rate of growth" of around 3.5% in terms of gross domestic product (GDP). The disturbing irony for the party could be that the children born out of a demographic surge accompanying the gradual reduction in the share of the population living below the poverty line defined by basic needs has thrown up hundreds of millions of voters who feel themselves to be poor enough but unaware of the history of the country's poverty.  They stand above the poverty line and have turned out to be a powerful socio-economic vote bank for the BJP.

Sometime during his tenure as Prime Minister, the late BJP leader Atal Behari Vajpayee had remarked that people increasingly demanded schools, roads and hospitals. This could have been a demographic turning point for the political discourse that Modi has capitalised on. For the better part of Indians now, needs have shifted from "Roti, Kapda Aur Makan" to "Sadak, Bijli and Shiksha". The BJP has smartly shifted its focus towards the 'aspirational poor' while the Congress has been mired in its past -- focused on the absolute poor.

For instance, the rural road scheme's coverage, though started under Vajpayee, increased from 55% to 82% over the past five years. The Saubhagya scheme extended rural electricity to target households rather than just villages. About 2.62 crore households (More than half the number targeted by Congress under NYAY) were covered by this scheme in under 2 years before the polls caught momentum.

In a tangential way, the outreach's beneficiaries comprised substantially of the poorer sections of women. It is significant that women closed the gender gap in the record 67.36% voter turnout in the 2019 elections, lagging men by a negligible 0.1%.

In contrast, Congress has historically focused on the rural employment guarantee (Mahatma Gandhi Rural Employment Guarantee Act Scheme) that targets the absolute poor on the verge of starvation and initiatives like the Right to Education and Right to Information laws that may appeal to social activists but not directly to a significant mass of voters in a new, changed India. This is populism at work with a new twist.

According to government data the share of India's population below the absolute poverty line (defined in World Bank terms as those with less than $1.9 to spend per day) fell from 45.3% in 1993-94, soon after economic reforms began under Congress rule, to 21.9% in 2011-12, towards the sputtering end of the Congress-led UPA's rule.

If you juxtapose that with the growth in population from 84.6 crore to 121.1 crore in 2011 (an increase of about 36.5 crore)  the picture becomes clearer. As much as 23.4% of a substantially higher population moved above the poverty line over roughly two decades.  Last year, the World Data Lab estimated that the number of India's "extremely poor" fell to only 7 crore in 2018 from 30.6 crore in 2011.

With India's population having crossed 130 crore, it is safe to say that at least 30 crore people would have crossed the absolute poverty line to join the ranks of the aspirational poor in the two decades before Modi came to power in 2014, giving him the potential to craft a new addressable vote bank above the poverty line.

With 70% of the population eligible to vote, that would mean a potential bank of 21 crore. A large chunk of them would be those who had never experienced the abject poverty of their parents' generation.

The decline of caste-based parties such as the BahujanSamaj Party and the Samajwadi Party in Uttar Pradesh seems to bear out the hypothesis that vast sections of the rural poor found a higher emotional connection with Modi's redefined idea of poverty than the traditional appeal to vote on the basis of  identity which is largely centred around access to government jobs or sheer appeal to clannish sentiments.

BJP's national vote share rose to 37.38% in 2019 from 31% in 2014 as its seat tally went up to 303 from 281 in the 542-seat Lok Sabha. Though vote transference to and from its National Democratic Alliance partners is a factor,  there is little doubt that both the agenda and the leadership belonged to the BJP and Modi, and the party can take credit for the surge in vote share.

Though voting is a composite process in which everything from Modi's style of leadership and factors such as his ordering the Balakot air strikes in Pakistani territory in Kashmir matter in the larger scheme of things, there is every reason to believe that his "development' plank consisted of a slew of schemes that included the passage of a law to reserve 10% in government jobs for the economically poor in the upper castes.

Given the overall turnout was one percentage point more than 2014 at 67.36% and the total number of eligible voters are 90 crore, the increase in vote share for the BJP roughly translates to about 4 crore votes in a universe of about 61 crore voters -- enough to help a significant surge in seat share in the first-past-the-post system.  These new votes would have likely come from the 21 crore located above the poverty line.

The Modi campaign stressed on fighting poverty even as he mocked opposition parties ganging up against him in a "mahamilavat" (Great hotch-potch). Since in many heartland states including Bihar, Madhya Pradesh, Rajasthan and Uttar Pradesh (once called Bimaru), there was no alliance between the Congress and the BahujanSamaj Party (and its UP partner Samajwadi Party),  the BJP's carefully crafted vote surge seems to have helped it easily sail over its rivals.

Economists have been targeting the rate of unemployment in India to suggest political action, forgetting that political parties address a larger universe of citizens who include a huge number of those who may be employed but are poor, with a sense of aspiration and matching vote power.

The Centre for Monitoring the Indian Economy (CMIE), the most influential independent think-tank measuring the jobless, estimates the current unemployment rate around 7%. This may be alarming for economists. For politicians, however, the biggest addressable vote bank matters more. They come from the 93% outside of the measurably unemployed.

Around 2014, the government's own National Sample Survey Office (NSSO) estimated that only 9.02 crore (57.8 %) out of the country’s estimated 15.61 crore rural households were “agricultural” — defined as those having at least one member self-employed in farming. Less than 60% of the incomes of these households came from agriculture. This trend can only accelerate as the economy grows, despite hiccups caused by factors such as the demonetisation of high-value currency notes or bad loans in banking.

What all this implies is that proportional to the share of the overall Indian population, neither the agrarian crisis nor a lack of new jobs may be as significant in electoral terms as the Congress party might have believed.

In terms of social morality, the Congress may have had its heart in the right place, batting for the jobless, the absolute poor and the suffering farmers. But elections are increasingly about emerging aspirations, not basic needs. Looking above the poverty line might make more political sense in a new-New India.

(The writer is an independent journalist, political analyst and commentator. Views expressed are personal)