Located about 29 km from the India-China border, the polling station covers two villages— Tashigang and Gete. The polling parties have reached the destination despite extreme cold conditions and snowfall in the area. 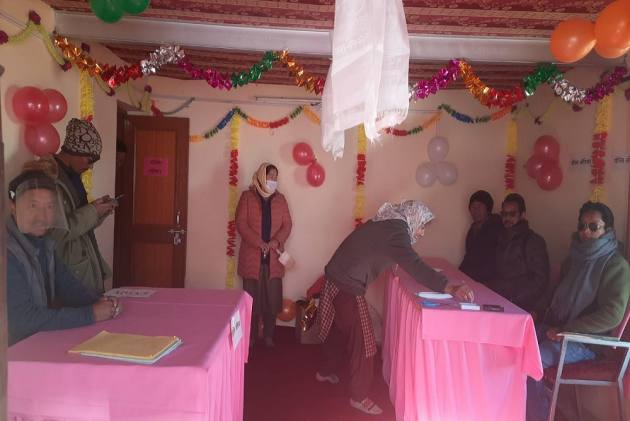 After the season's first snowfall, Spiti is closed for tourists, but there will be different kind of a festival at the high altitude cold desert on October 30.

Tashigang, the world’s highest polling station, at a height of 15,256 feet, will see a rare festivity on polling day for Mandi Parliamentary constituency–a bypoll being held after the demise of two-time BJP MP Ram Swaroop Sharma.

State’s Chief Electoral officer (CEO) C Paulrasu said the polling party for Tashigang has already reached the village with all material. They have set up the booth,which is also among 14 polling stations designated as Model polling stations by the Election Commission of India (ECI).

Village In Himachal Pradesh Is Boycotting Polls This Time; Here’s Why

He said all arrangements have been done for free, fair and smooth polling in all eight districts, which are witnessing polling on October 30. These also include snow-bound valleys of Lahaul-spiti, Kinnaur and Pangi, besides inaccessible areas of Kullu, where the polling party will have to walk 24 kms, and one booth in Fatehpur (Kangra), where the officials will have to travel by boats.

There are a total of 47 voters at Tashigang, a Buddhists landscape. The village, also known for world’s highest motorable road, has a post office and drinking water supply.

Last week Lahaul-Spiti had witnessed season’s first snowfall following which 83 tourists got stranded at Batal, a few kms short of Kunzam Pass, which is a treacherous 15,000 feet high mountain valley.

“Located about 29 km from the India-China border, the polling station covers two villages— Tashigang and Gete. As per the revised electoral rolls, the two villages have 47 voters,” said an official at Kaza, headquarter of Spiti.

Deputy Commissioner Lahaul Spiti said all polling parties have reached their destinations despite extreme cold conditions and snowfall in the area.

Some of the highest and lowest polling booths in the state are Atyal in Jubbal kotkhai at elevation of 8500 feet, Pambad in Arki at height of 6204 feet and Agahar at Fatehpur located at elevation of 2100 feet.

Meanwhile, another panchayat Jangi in Kinnaur has given a call for a poll boycott on October 30 in protest against the 804 MW Jangi Thopan hydel project. A gram sabha held at Jangi unanimously decided not to participate in the electoral process to mark their protest against the approval given to SJVN ltd company to set up a mega project, which will allegedly cause a big environmental impact and prove to be an ecological disaster. There are more than 500 votes at Jangi. Earlier, Rarang village had also given a call fore poll boycott.