There Are 'Kids' In Parliament, Yoga Can Help: Ram Madhav's Dig At Rahul Gandhi

During President Ram Nath Kovind's address to a joint sitting of both Houses of Parliament on Thursday, Congress President Rahul Gandhi was seen scrolling through his mobile phone, kicking up a row. 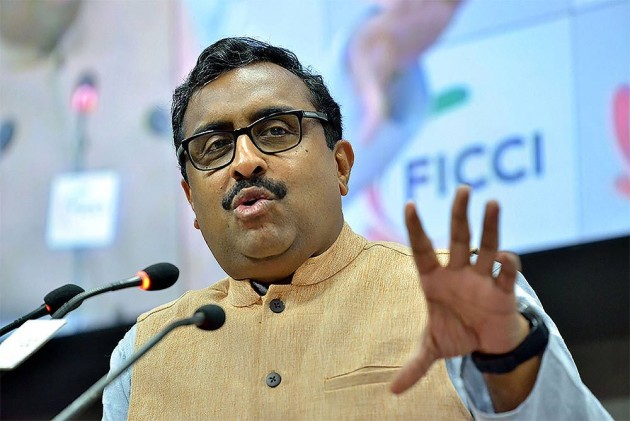 Taking a swipe at Congress chief Rahul Gandhi, who courted controversy for browsing his mobile phone during the President's address, BJP National General Secretary Ram Madhav on Friday said there were "kids" in Parliament and yoga will help those with "kiddish temperament".

Inaugurating a programme organised by the BJP in Thiruvananthapuram to celebrate the International Day of Yoga, Madhav took the dig at Gandhi.

During President Ram Nath Kovind's address to a joint sitting of both Houses of Parliament on Thursday, Gandhi was seen scrolling through his mobile phone, kicking up a row.

"They can't even focus on the speech by our President. They have to go through their mobile phones, check their messages, or play video games. This kiddish temperament of unstable mind, if this needs to be controlled, you need yoga," the BJP leader said.

Following the row over Gandhi using his phone, the Congress objected to comments made by some BJP leaders and said the ruling party should not make such remarks.

On the Sabarimala temple issue, which saw protests breaking out after the Kerala government decided to implement the apex court verdict, allowing women of all ages to offer prayers at the Lord Ayyappa shrine, Madhav said people here were forced to go on to the streets to save their traditions, and this was like the situation that prevailed under the Mughal rule.

Some people think, that "every tradition in this country is to be dismissed, or hated. Whether it is Sabarimala tradition, or yoga. Because it is Indian. Because this is based on ancient wisdom of this country, they hate it", he said.

"They just want to destroy it, They do not realise that this tradition, this culture, this value system is what is going to ultimately save the world and take it on the path of peace, prosperity and development. They are out to destroy these traditions. We need to teach yoga to them also," Madhav said.

The national secretary of the saffron party said, the state government should have come forward and practised yoga to make Kerala a better place, adding that even the British used to respect Indian traditions.

"I wish your state government has also celebrated this yoga day. They should have come forward and practised yoga, and developed some patience, so that in Kerala you would have had better peace. Today people in Kerala are forced to go on to streets to save their traditions.

"In this country, this used to be the situation under Mughal rule. Even the British used to respect the traditions here. But today under the rule of our own people... we have to go the streets and run hundreds of kilometres of human chain to protect our temples and traditions," the BJP leader said.

The Kerala government had arranged various functions across the state to celebrate yoga day with Chief Minister Pinarayi Vijayan participating in one such event in the capital city.

Madhav also said that the country's "ancient wisdom" should have been given to the world when the country got independence.

"We should have gone out and told the world, that more than non-alignment, more than many other things, it's yoga, ayurveda. It is the way of life that ancient Indian sages have developed that is what we have to offer to you," he added.