There Has Never Been Such A 'Weaker Govt', 'Weaker PM', Says Priyanka Gandhi In Wayanad

The state will vote on April 23 in the fourth phase of the staggered elections. 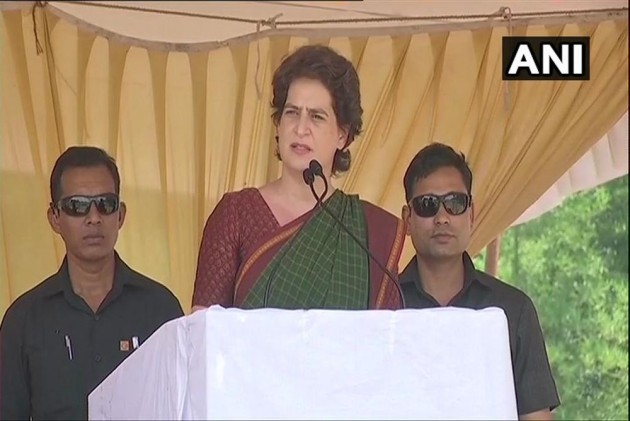 Congress General Secretary Priyanka Gandhi on Saturday lashed out at the BJP and Prime Minister Narendra Modi, saying there has never been a "weaker government" and "weaker Prime Minister" than the incumbent ones.

Priyanka, who is in Wayanad, where her brother and party chief Rahul Gandhi, is contesting besides Amethi in Uttar Pradesh, sought to know whether suppressing the voice of those who criticise the government's policies amounts to nationalism.

Addressing a massive rally of farmers in Pulpally, she questioned the nationalism of those who refused to listen to thousands of farmers who had "marched barefoot" to Delhi to highlight their problems.

Priyanka said people deserve a Prime Minister who respects them and does not dismiss his own promises casually.

"Sisters and brothers of Wayanad, I have never seen a weaker government, than the government that has been in power for the last five years in India.

I think you deserve a government that speaks for you," she said.

"You deserve a government that encourages you to raise your voice even when it is against the government.

I believe you deserve a Prime Minister who respects you and who respects every word that he speaks before you and does not dismiss casually his own promises," she added.

The AICC in-charge of Eastern Uttar Pradesh wanted to know if attempts to destroy the Constitution and weakening institutions that protect the rights of the people was nationalism.

"They (BJP) attempt to divide you and talk about nationalism... When thousands of farmers marched barefoot from all corners of the country to your doorstep and you send them away without listening to their suffering..."

"When people raise their voice in protest against you when they criticise your policies... you jail them, beat them.. Is that nationalism?" she asked.

Referring to BJP leaders invoking Pakistan in their election speeches, Priyanka said they never speak of what they were going to do for the people of the country.

"When you come to election rallies and speak of Pakistan, but you do not speak of what you are going to do for the people of India or what you promised them and did not deliver, is that nationalism?.." Priyanka questioned.

Earlier at a rally in Manthawady, she said the saffron party, when it came to power, forgot who gave them the power.

"Five years ago, a government came to power that was voted with majority. The people of our country, with all their wisdom, rested their faith upon them. But from the moment it came to power, it began to betray the faith of the people," she said.