In wake of the Dhanbad incident, the top court has taken suo motu cognizance on the issue of safeguarding courts and protecting judges. 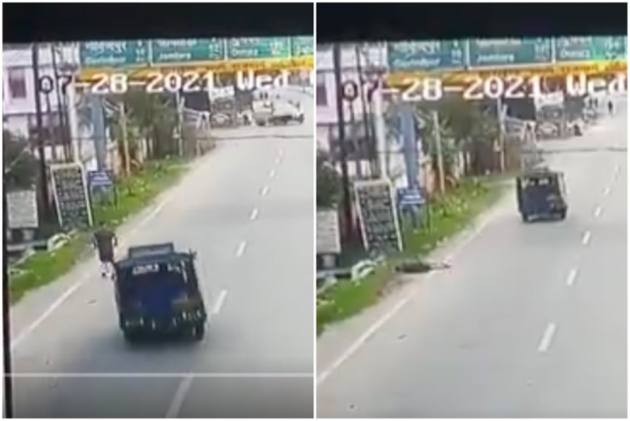 The investigating agencies do not respond when judges complain about threats, Chief Justice of India NV Ramana said today as the Supreme Court took up the murder of a Jharkhand district judge last week.

A bench comprising Chief Justice N V Ramana and Justice Surya Kant also issued notice to the CBI which has taken over the investigation into the recent incident of alleged mowing down of a judge at Dhanbad.

The apex court said there are several criminal cases involving gangsters and high-profile persons and at some places, judges of the trial courts as well as high courts are being threatened not only physically but also mentally through abusive messages on Whatsapp or Facebook.

“In one or two places, the court ordered CBI inquiry. It is very sorry to say that CBI has done nothing in more than one year. At one place, I know, CBI has done nothing. I think we have expected some changes in CBI’s attitude. But there is no change in the attitude of CBI. I am sorry to observe this but this is the situation,” said Chief Justice N V Ramana, who was heading a bench which also comprised Justice Surya Kant.

The bench told Attorney General K K Venugopal that in criminal cases where high-profile persons are involved, if they do not get expected orders from the court they start maligning the judiciary.

“This is a new trend developed in the country unfortunately. There is no freedom to a judge even to give a complaint. Such a situation is created,” said the bench, which was hearing a suo motu case on the issue of safeguarding courts and protecting judges in the wake of recent incident of alleged mowing down of a judge at Dhanbad.

The CJI said though judges complaints to the chief justice or the concerned head of the district, when they complaint to the police or the CBI or others, these agencies do not respond.

“They think it is not a priority item for them. The IB, CBI they are not helping the judiciary at all. I am making this statement with a sense of responsibility and I know the incident that is the reason I am saying this. I do not want to divulge more than this,” the CJI said.

The bench termed the issue “serious” and told Venugopal that some interest has to be taken to help the judiciary.

Venugopal said judges dealing with criminal cases are very vulnerable and said there has to be safety measures for them.

He said judges are more vulnerable than the bureaucrats who take decisions within the four corners of their rooms.

Venugopal said he would file his written note on the issue.

Meanwhile, the bench issued notice to the CBI after it was informed by Jharkhand government that investigation into the death of the judge in Dhanbad has been handed over to the probe agency.

The apex court also asked all the states to file status reports explaining what security they are providing to the judicial officers.

At the outset, Jharkhand’s advocate general Rajiv Ranjan told the bench that the state had constituted a 22-member special investigation team (SIT) which had arrested the two drivers of the auto-rickshaw which had hit the judge when he was on morning walk on July 28.

Ranjan said the case has now been handed over to the CBI.

“So, you have washed off your hands?,” the bench said.

To this, Ranjan said SIT had collected several evidence and since the area is a border district with West Bengal, there might be a larger conspiracy and cross-border implications.

“We will hear the Jharkhand matter on Monday (August 9). We are issuing notice to the CBI,” the bench said.

It asked Jharkhand’s counsel whether they have provided adequate security at the residence of judges in the state.

The counsel said orders have been issued and adequate police protection has been provided at the residences and colonies of the judicial officers.

Referring to the Dhanbad incident, the bench said it is an unfortunate case where a young judicial officer lost his life.

“We cannot ignore the state’s negligence. We know in Dhanbad area there are mafias, coal mafias. Advocates were killed, judges were attacked but in spite of that, state has not done anything,” the bench observed.

The state’s counsel apprised the bench about the steps being taken in this regard and also about beefing up of security in court premises by installing more CCTV cameras and having boundary walls.

The bench observed that hardened criminals cannot be stopped by these boundary walls.

During the hearing, the bench told Venugopal that a writ petition was filed in the apex court in 2019 seeking certain directions, including on security in court premises and also to create an environment where the judges can work independently.

“In that case, it appears that Government of India has not filed any counter affidavit so far,” the bench said.

When Venugopal said he would look into it, the bench asked him to ensure that counter affidavit is filed so that the court can take a final call in the matter.

The petition filed in 2019 was also taken up for hearing by the bench along with the suo motu case.

The apex court asked the states to file status report regarding security provided to the judges and posted it for hearing on August 17.

District and Sessions Judge-8 of Dhanbad court, Uttam Anand, was out on morning walk on July 28 when he was killed by an auto-rickshaw at Randhir Verma Chowk near the district court in the Sadar police station area.

On July 30, the top court had taken suo motu cognizance and had sought a status report within a week from Jharkhand’s Chief Secretary and the DGP on the probe, saying reports and video clippings suggested “it was not a case of simpliciter road accident.”