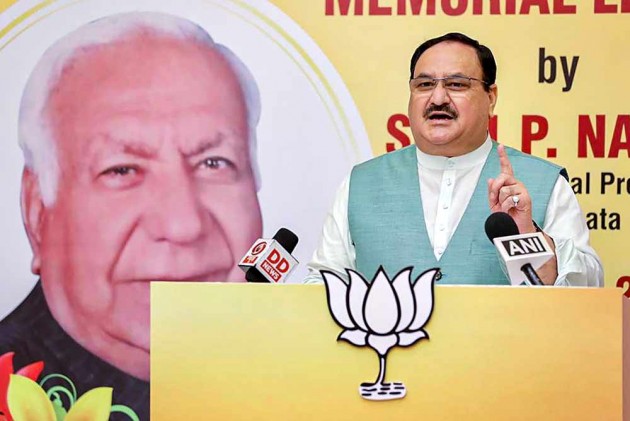 BJP president J.P. Nadda on Saturday attacked the RJD and the Congress, two key constituents of the Opposition Grand Alliance in Bihar, accusing the two parties of creating obstacles in the construction of Ram temple at Ayodhya.

Nadda also alleged that the RJD is known for "anarchy" and the Congress is an "anti-national party".

The day-to-day hearing in the Ram Janmabhoomi-Babri Masjid land dispute case in Ayodhya in the Supreme Court, which paved the way for the final ruling in the matter after decades, started after the Narendra Modi government came to power at the Centre for a second time, he said.

The BJP leader said that the apex court judgement went in favour of a Ram Mandir and construction of a grand temple is currently underway in Ayodhya.

"Everyone in the country wanted to see a grand Ram temple at Sri Ram janmabhoomi in Ayodhya but the Congress did everything to protract the case," he alleged.

"Crores of people wanted construction of a grand Ram temple, but when (Lal Krishna) Advani jee began his rath yatra for a temple at Ayodhya, it was Lalu Prasad who stopped it in Bihar," Nadda said.

On October 23, 1990, Advani's rath was stopped by the orders of RJD boss and the then Bihar Chief Minister Lalu Prasad at Samastipur.

The BJP president also criticised the Congress alleging that its senior leader Kapil Sibal, who was the lawyer for one of the parties involved in the Ayodhya land dispute matter, tried to protract the case in the Supreme Court.

Training his guns at the Grand Alliance, Nadda said, "The RJD is a party which is known for anarchy. The CPI(ML) spreads destruction in the society whereas the Congress is an anti-national party. This Grand Alliance cannot usher development in Bihar."

The opposition grouping comprises the RJD, the Congress and three Left parties - the CPI(ML), the CPI(M) and the CPI.

The RJD, which once organised a "Tel pilawan, danda bhajawan (Apply oil, swing sticks) rally", cannot do any good to Bihar in future as it did nothing when it had the opportunity, the BJP leader said.

Nadda was referring to a 'lathi rally' that the RJD had taken out in 2003 to fight the communal forces in the country. Lalu Prasad, who applied oil on a stick publicly days before the rally, had said that lathi was chosen as a symbol for the rally as people use it against harmful creatures.

Attacking Prasad's younger son and the Grand Alliance's chief ministerial face Tejashwi Yadav, Nadda asked how his party, which allegedly forced people to migrate to other states in search of livelihood during its regime, can provide jobs.

Tejashwi has recently announced that if the RJD-led Grand Alliance is voted to power, 10 lakh government jobs will be sanctioned in the very first cabinet meeting.

Chief Minister Nitish Kumar and his JD(U) fought the last assembly elections as part of the Grand Alliance, but he had to leave the coalition, the BJP president said.

Kumar joined the Grand Alliance of the RJD and the Congress and won the 2015 assembly election. But after around two years, he ended the relationship with the coalition over corruption charges against Tejashwi Yadav and returned to NDA to form a new government.

The Rajiv Gandhi Foundation has received money from China and now Rahul Gandhi claims himself to be a nationalist, Nadda claimed.

"I have sought an account of the money that Rajiv Gandhi Foundation had taken from China but the mother (Sonia Gandhi) and the son have not responded to it," he said.

Rahul Gandhi has been attacking the BJP-led government at the Centre over the Ladakh face-off, claiming that China "took away" India's land there.

A Pakistani minister recently admitted its involvement in the Pulwama terror attack but Rahul Gandhi was demanding evidence, Nadda said.

He said that Pakistani Prime Minister referred to Rahul Gandhi's statement in the UN on the issue of abrogation of Article 370 which gave special status to Jammu and Kashmir.

The BJP government erected Sardar Vallabhbhai Patel's statue, which is the tallest in the world and is visited by lakhs of people for paying their homage to him, but Congress leaders do not go to that place, Nadda said.

He urged people to vote for the NDA if they want development of Bihar and claimed that earlier elections were fought on the basis of caste and religion but this political culture has changed since Narendra Modi became the PM.