“Never drive men and women in uniform to the wall and let them lose faith in their own service and own seniors. They must trust their seniors that while they do their duty they shall be defended, protected and heard before being judged,”Kiran Bedi said. 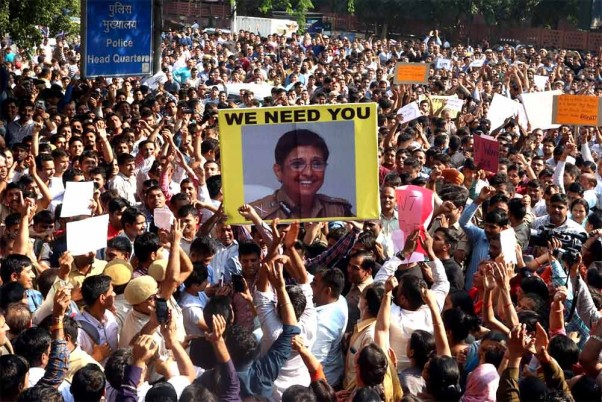 Policemen and women need to be protected by their seniors, said Kiran Bedi, the Puducherry Lt. Governor and former IPS officer, reacting to Tuesday’s protests by police personnel in Delhi over attacks on their colleagues by lawyers in the last few days .

“When Police men and women perform their duty fairly, firmly, fearlessly and responsibly, they need to be protected by their seniors,” Bedi said in a statement.

In unprecedented protests by Delhi police, thousands of its personnel on Tuesday laid siege outside the Police Headquarters for 11 hours and staged a virtual revolt sparked by two attacks on their colleagues at the city’s Tis Hazari court and Saket court. The protests ended at night after an assurance by senior officers that their grievances will be addressed.

“Never drive men and women in uniform to the wall and let them lose faith in their own service and own seniors. They must trust their seniors that while they do their duty they shall be defended, protected and heard before being judged,” the former IPS officer said.

Bedi had faced a similar situation in January 1988 when a lawyer arrested for theft in St. Stephen's college was brought to the Tis Hazari court in handcuffs.

"But I remained firm and refused to budge to the demand of the lawyers seeking suspension/arrest of the cops responsible for hand cuffing the advocate," she told news agency PTI, adding that the person did not identify himself as an advocate at the time of his arrest and also gave a different name to the police.

In the present incident too, the "Delhi Police should take a stand and be firm on it come what may", she said.

Bedi, a former IPS officer of 1972 batch who retired in the rank of DGP, said during the 1988 police-lawyers clashes at Tis Hazari, wherein she was DCP (North) then, there were demands from the advocates associations for her suspension and arrest. But the then police commissioner Ved Marwah strongly supported her and rejected the demands, she said.

Kiran Bedi is also known as "Crane Bedi" for ordering the towing away of former Prime Minister Indira Gandhi's car from Delhi's Connaught Place area in 1982.

Also Read | Delhi Police Reap What They Have Sowed: Lawlessness Of Lawyers