'They Wear Masks Of Love And Abuse Me, Even Abused My Mother', PM Modi Hits Out At Congress

Prime Minister Narendra Modi, addressing a rally in Kurukshetra, accused the Congress of hurling abuses at him from its "love dictionary" and said the party did not even spare his mother. 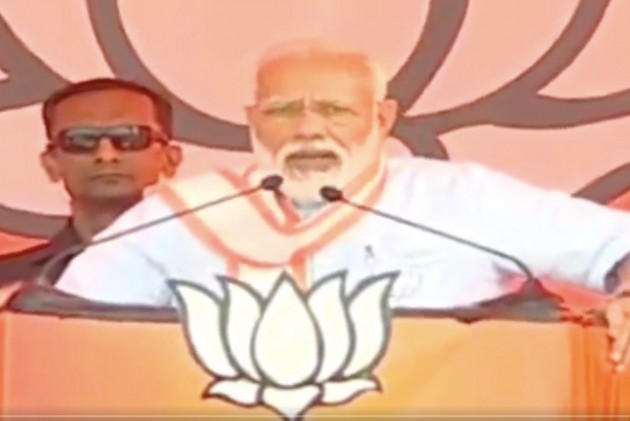 Prime Minister Narendra Modi Wednesday accused the Congress of hurling abuses at him from its "love dictionary" and said the party did not even spare his mother.

"I stopped their corruption and challenged their dynasty because of which they wear masks of love and abuse me," he said in a rally at Kurukshetra.

The prime minister claimed that the Congress also compared him to Hitler, Dawood Ibrahim, Mussolini, etc.

"I am visiting my home, Haryana and Kurukshetra is a land of truth so from here I want to tell my countrymen what is their love dictionary and the words they use for me," Modi said.

His remarks came after Congress president Rahul Gandhi said Monday that despite Modi insulting his father Rajiv Gandhi, he only had love for the prime minister.

"A leader of Congress called me 'gandi naali ka keeda' (an insect), one leader called me a mad dog, another one called me Bhasmasura. One more Congress leader, who was external affairs minister, called me a monkey while another minister compared me with Dawood Ibrahim," Modi alleged.

"They even abused my mother and even asked who my father is and remember all this was said after I became Prime Minister," he said.

He was speaking at his second poll rally of the day in Haryana. Before this, he had addressed a public meeting in Fatehabad.

The prime minister alleged that the Congress has given tickets to people who talk about chopping him into pieces.

He said nobody has ever questioned this behaviour of Congress leaders.

"Those who talk about chopping me into pieces, Congress has backed them by giving them tickets and increased their morale because they want to chop Modi into pieces," Modi said.

"I know speaking such kind of words from a public platform is not right. Children studying in schools and colleges, they too are listening to my speech, but they should neither learn nor speak such kind of language (used by Congress leaders against him)," he added.

Ten Lok Sabha seats of Haryana go to polls in the sixth phase on May 12.