This Election Season, A Platter Of Music, Poetry And Politics, Please 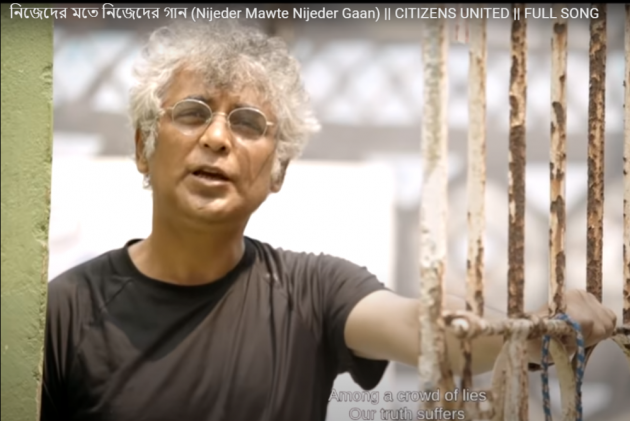 “Music expresses that which cannot be said and on which it is impossible to be silent.” —Victor Hugo

A star-studded music video has created a lot of buzz in West Bengal, where the fourth phase of the Assembly elections is scheduled to take place on Saturday.

Titled ‘Nijeder Mote Nijeder Gan’ (In our own way, our own song), the video has garnered more than 71,000 likes on YouTube and it has once again generated conversations on the confluence of art and politics.

With references to Rabindranath Tagore’s ‘Red Oleanders’, the Indian Constitution, Goebbels’ Mirror, the artistes in the video highlight the need for communal harmony and voice their dissent on fascism, right-wing politics and monopolisation of patriotism.

Penned by Anirban Bhattacharya, composed by Subhadeep Guha and directed by Riddhi Sen and Rwitobroto Mukherjee, the inspiration for the video stemmed from the anti-Citizenship Amendment Act (CAA) protests.

While the video has many recurring themes, Subhadeep Guha, said the key message of the song revolves around the phrase “desh drohi”.

“The very phrase is puzzling. I love my country and no one can call me a ‘desh drohi’ or tell me to go to Pakistan or anywhere else for that matter. We all love our country and we are here to stay,” Guha said.

“Since January, many celebrities started picking sides and joined political parties. So, we made this video to drive home the message that civil society movement is not dead in Bengal and that to voice one’s political opinion, one doesn’t necessarily need to be a part of a particular political party,” Sen said.

And even as the video makes this dissent plain and clear, it has revived the age-old debate-- whether artistes should merely stick to art and how much politics can be incorporated in one’s art?

What is art without politics, mused Suman Mukherjee.

“I think art without politics is a kind of conundrum, it doesn’t make any sense. It’s a fallacy. Art is all about politics as any story we tell, concerns society and its politics. It doesn’t mean we have to always talks about politics in our art but we cannot deny that we are all affected by the economic and socio-cultural climate of our times. So, art cannot exist without politics,” Mukherjee said.

Meanwhile, Sen believes that many people find the confluence of art and politics problematic only because we, as a society, have restricted the definition of politics to political parties.

“I don’t think artistes should join political parties, our politics shouldn’t be party-oriented but at the same time, we all should have our own political opinions and be politically aware. When a celebrity joins a political party, he/she is celebrated but when we voice our dissent as individuals, we receive backlash and that is what we wanted to change through this video,” Sen said.

Guha couldn’t agree more. In fact, he firmly believes that art should not be confined to drawing rooms, it shouldn’t be restricted to entertainment and that artistes have a social responsibility to speak up.

“There have been a lot of songs in Bengal regarding elections but our song is not just about the ongoing elections. It tries to address the current political trend in the country,” Guha said.

To drive home his point, Guha also says that if art and politics were to be separated, we wouldn’t have had the good fortune of seeing one of Picasso’s greatest masterpiece — Guernica.

While the entire video is in Bengali, towards the end we hear a portion of Faiz Ahmad Faiz’s ‘Hum Dekhenge’ in Urdu.

“We incorporated ‘Hum Dekhenge’ because the song was initially written keeping in mind the anti-Citizenship Act Protests. This poem of Faiz’s, was widely used during those protests and we wanted to align ourselves with the broader protest movement taking place in the country,” Guha said.

The confluence of poetry, music and politics is neither new to Bengal nor to India and ‘Nijeder Mote Nijeder Gan’ is the latest entrant to fit right into this genre.