This Is Just The Beginning, Stir Will Continue: Farmer Unions

'Let us see if their prisons are big enough to fit us all,' said Abhimanyu Kohar of SKM, adding that 'peaceful protests' will be held before police stations from noon to 4 pm on Monday. 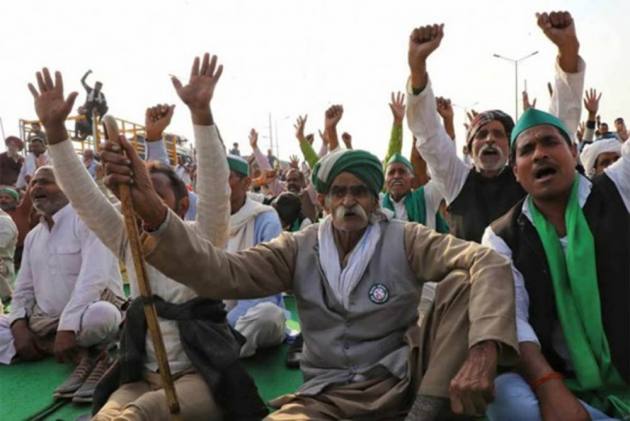 Farmer unions protesting the Centre’s agriculture reform laws are now gearing up to target the Bharatiya Janata Party (BJP) on its turf. The agenda is ‘Haryana now, Uttar Pradesh later and then spread the agitation across the country’.

The platform of Samyukta Kisan Morcha (SKM) has decided to fight a political war, albeit without donning a colour. The idea is to throw their weight behind a party that may defeat the BJP in a particular constituency.

In the run-up, SKM members will “court arrest” all over Haryana on Monday, June 7, as a mark of protest over the state taking farmers into custody during their agitation.

'Livelihood And Food Security Of Country At Stake'

Farmers In For Long Haul, Plan To Intensify Protests, Call For Bharat Bandh

“Let us see if their prisons are big enough to fit us all,” said Abhimanyu Kohar of SKM, adding that “peaceful protests” will be held before police stations from noon to 4 pm on Monday.

“But this is just the beginning; the stir will continue,” he promised on a social media post.

For those leading the agitation, it is a thin line to tread – trying to keep the stir peaceful and also to abide by its commitment of keeping the protests apolitical.

“The government wants us to withdraw from the borders of the national capital and confine the protests between Hissar and Jind (in Haryana),” said Bharatiya Kisan Union (BKU) leader Rakesh Tikait, addressing supporters at a sit-in demonstration in front of the Tohana City Police Station of Fatehabad district.

The Monday protests are a spillover of the sit-in at Tohana.

Tikait is leading the protest demanding the immediate release of farmers arrested for demonstrations in the area. According to SKM, they were protesting over the inappropriate language used by Tohana MLA Devender Singh Babli.

A five-day stand-off was diffused after the Jannayak Janta Party (JJP) MLA apologised to the farmers and stated that he forgives those with whom he had a heated exchange in early June.

“Authorities want to break our stir. They want the attention to be diverted from Delhi’s borders. That’s why the Haryana government is instigating protestors,” claimed Yudhvir Singh, general secretary, BKU.

Once the monsoon gets over, post-July, groups of peasants led by prominent union leaders will travel across Uttar Pradesh and Uttarakhand where assembly elections are due in 2022.

A similar exercise was undertaken in West Bengal this year, but it was confined to just a couple of constituencies. However, buoyed by the setbacks to BJP in West Bengal assembly elections and later in Uttar Pradesh local body polls, the unions have decided to up the political ante.

“The struggle started from Punjab, Uttar Pradesh, Rajasthan, and Haryana and started spreading across the country. Now we’ll reach out to all six lakh villages,” said Yudhvir Singh.

The process of “awareness and awaking”, he added, will begin in Uttar Pradesh and Uttarakhand once the Covid situation stabilises and the monsoon gets over. “Then we will move towards Madhya Pradesh and the rest of the country,” the BKU leader said.

Meetings are being held separately with representatives from various parts of Uttar Pradesh. According to some leaders, participants from four out of the 18 divisions in UP have already taken part in meetings held over the past few days.

Meanwhile, to maintain a steady headcount at the protest sites at Delhi’s borders, a group of farmers is coming from each area to spend a week. Currently, it is the turn of the tillers from Ambala. The next group is expected from Panipat.

Protest over the three farm bills is going on since November 26 mainly at Singhu, Tikri and Ghaziabad borders. Topping the list of their demands are – complete repeal of the farm laws and legalising minimum support price.