Watch: You Can Now Contact This Pug For Rishtas Because He Is All 'Groomed' Up

A pet owner in Kerala dressed up their pooch in a traditional Kasavu Mundu and said they were looking for ‘rishtas’, taking social media by storm 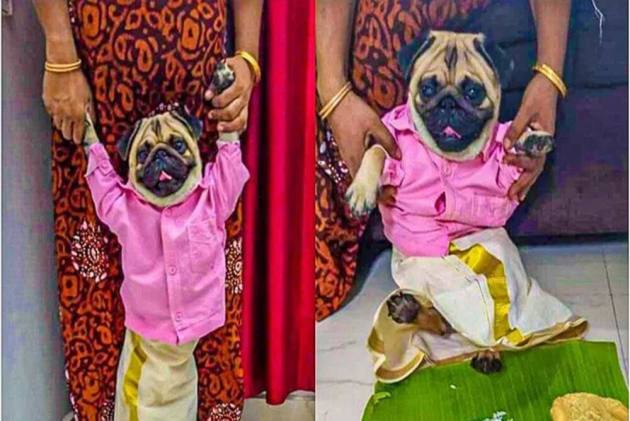 Virtual search for a life partner may or may not work for us humans but it has definitely worked for this pooch in Kerala. A pet owner has now hit the internet in search of a future partner for his adorable pug, whom he dressed up in a traditional Kasavu Mundu and a pink shirt.

The pug was seen standing and posing in the traditional attire in one picture, while the other picture had him sitting before a Sadya, consisting of a variety of traditional vegetarian dishes served on a banana leaf.

“If anyone’s looking for a handsome Malayali boy to get your beautiful daughter married off to… ;),” read the caption accompanying the viral picture. The pictures of the dog went viral when a Twitter user shared them.

Ever since then, the internet cannot get over Indian families being extra with their furry friends. Not to mention, the pug is also receiving tons of rishtas from all parts of the country!

My girl is here, she’s from #Kashmir pic.twitter.com/BOFT9aGlbP