This School In Maharashtra Gave A Makeover To A Dead Tree, Now It's A 6-Feet Pencil!

The secondary school in Wai, run by the Deccan Education Society, engaged a carpenter recently to transform the stump of the tree into a six-foot-tall 'pencil'. 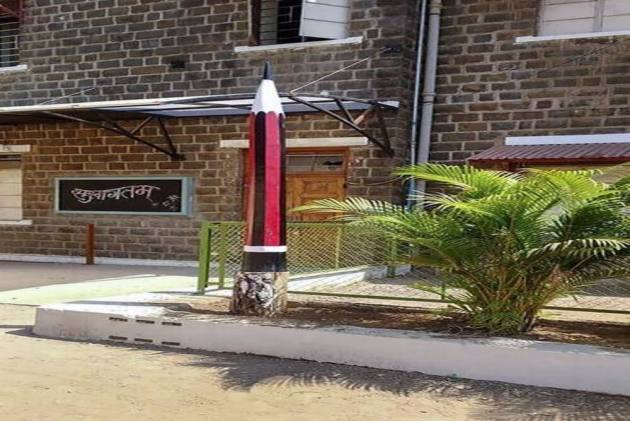 Instead of uprooting a dead 'silver oak' tree, a school in Maharashtra's Wai town has given an artistic makeover to it and has transformed its stump into the shape of a pencil.

People living in the vicinity are now visiting the Dravid High School even though educational institutions in the Wai town of Satara are closed in the wake of the rising COVID-19 cases.

The secondary school in Wai, run by the Deccan Education Society, engaged a carpenter recently to transform the stump of the tree into a six-foot-tall 'pencil', the logo of the Sarva Shiksha Abhiyan, a flagship programme of the central government for universal elementary education.

"We had an old silver oak tree which was dead for last several years and since it was at the entrance of the school, it was posing a danger to the school building as it could have fallen any time," its principal Nagesh Mone told PTI.

Mone had initially called some woodcutters to uproot the dead tree and remove it from the place.

"However, since the entire exercise was expensive, we decided to do something innovative," said Mone.

He then showed the tree to a carpenter, who was engaged in some work at the school, and asked if it could be given the shape of a pencil since its stump was straight.

"The carpenter took five to six days to give the shape of a pencil to the dead silver oak tree stump," said Mone.

It was a simple thought, but it was also a message for students and others to create something meaningful out of waste, he said.

Mone also said amid the coronavirus pandemic, they recently came out with small booklets for imparting education to students in simple and practical ways.

"Schools are closed, but parents of several students come to receive the mid-day meals (provided to students by the government). We arranged small training sessions for the parents and trained them on how to use these booklets by engaging their children at home," he said.

Earlier, in 2018, when Mone was the principal of the over 140-year-old New English School in Pune, he opened its gates for girls, making it a co-ed institution.

The school was started by educationists and freedom fighters like Bal Gangadhar Tilak.