The 6-hour long mahapanchayat platform had over 70 speakers addressing the crowd which included not just farmers but people from all trades in rural areas. 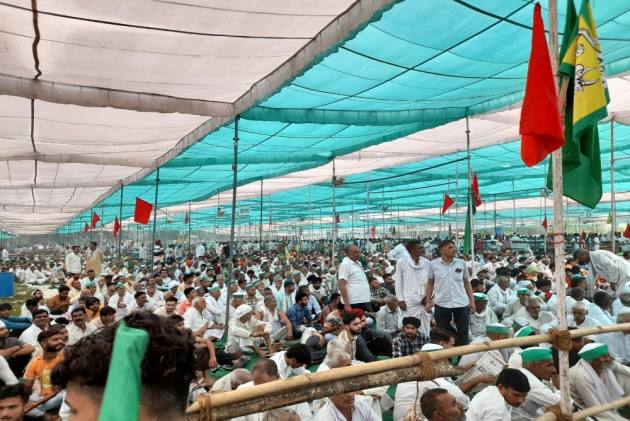 Tractor trolleys and busses were lined up on all roads leading to Muzaffarnagar, Uttar Pradesh, where thousands of farmers from several states had come to attended one of the largest gatherings of its kind to build up further pressure on the central government on their demand for repeal of the three new farm laws and fixing the right minimum support price (MSP) and making it mandatory for all buyers.

The 6-hour long mahapanchayat platform had over 70 speakers addressing the crowd which included not just farmers but people from all trades in rural areas. Rakesh Tikait, a Bharatiya Kisan Union leader, expanded the gamut of farmers' demand beyond repeal of the three new farm laws and making MSP not just mandatory but also as per Swaminathan Committee formula of input cost plus 50 percent.

With an eye on state assembly elections in UP and Uttarakhand in February, Tikait raised questions on the economic policies of the central government including privatization of public sector companies and assets. Some of the farmer leaders stressed that unlike corporate loans, there is no reprieve for farmers who, due to various reasons including crop loss, are not in a position to repay their loans on time.

Estimates vary on how many people attended the mahapanchayat, organized on the Government Inter College grounds in Muzaffarnagar, Uttar Pradesh, which became full very early forcing late arrivals to spread out across the town.

Hundreds of participants had reached Muzaffarnagar on Saturday while scores arrived in groups from various states and parts of Uttar Pradesh through the night. By early morning, the four parking areas for tractor trolleys and buses were buzzing with activity even as groups from different states could be seen going about their preparations. Several political parties utilized the event to express solidarity with the farmers to press home the message that they empathize with the concerns of rural folks.

Despite alleged attempts by the UP police to prevent busses from proceeding towards Muzaffarnagar, the protestors reached the town to hear their leaders. “Mission UP '' and “Mission Uttarakhand '' were launched at the event with Samyukt Kisan Morcha (SKM) announcing plans to continue the non-violent struggle by holding frequent mahapanchayats in every zila in the two states. The aim is to increase pressure on the central government to heed the farmers’ pleas or face political fallout in the upcoming state assembly elections. The UP chapter of SKM is scheduled to meet on September 9 and 10 to chalk out the next plans. The SKM, which has around 500 farmer groups under its umbrella, also announced plans to hold Bharat Bandh on September 27.

Lately the attempt of farmer leaders has been to ensure that their protests assume a national dimension. Thus, to mark completion of nine months of the protests, the farmer leaders held a two-day convention on Delhi border last month. Besides major representation from five states – UP, MP, Uttarakhand, Punjab and Haryana, representatives from over a dozen states including Kerala, Karnataka and Andhra Pradesh participated in the mahapanchayat on Sunday.