The march started from the Gandhi Maidan and the police blocked the protest at Dak Bungalow Chowk, using barricades and batons. 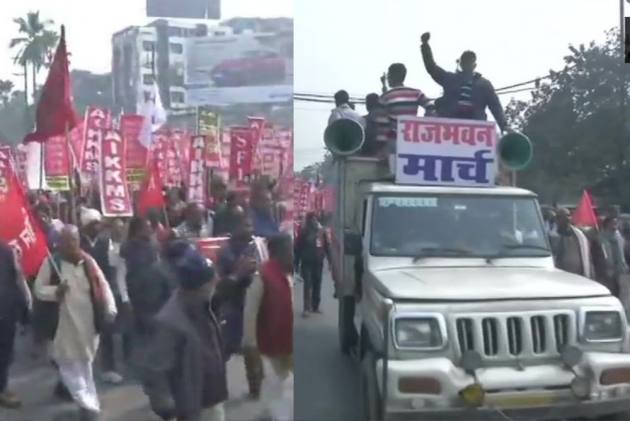 Several people were injured on Tuesday in a lathi charge at a busy crossing in the heart of Patna when police personnel tried to stop a procession, taken out in protest against the farm laws from heading towards the Raj Bhavan.

Traffic was thrown out of gear as thousands of protestors, comprising members of various farmers organizations and pro-Left outfits, marched through Frazer Road before they were thwarted at the Dak Bungalow crossing.

According to police, the crack down at Dak Bungalow crossing was preceded by skirmishes between the demonstrators and police and administrative officials at the Gandhi Maidan, the starting point of the rally, where agitators took exception to their entry being allowed inside the sprawling public ground only through one of the many gates.

Police sources said the restriction was put in place to avoid a stamped-like situation.

The demonstrators alleged that it was an attempt to suppress their voice.

Later, when they reached the Dak Bungalow crossing, about a kilometre and a half away, officials deployed there told the demonstrators that their march could not be allowed beyond that point.

As the demonstrators insisted on walking right up to the Raj Bhavan, some three km away, the police used force to prevent their march towards the restricted VIP area.

An unspecified number of injured protestors were taken to hospitals for treatment while a few were rounded up, the police said.

There was heavy deployment of force at Dak Bungalow crossing, where some of the demonstrators sought to stand their ground raising slogans, the police added.