Threat Has 'By No Means Reduced': Army Chief On Eastern Ladakh Stand-off

Gen Naravane said his forces have been maintaining the highest level of operational preparedness in eastern Ladakh and the threat assessment and internal deliberations have resulted in re-organisation and re-alignment of the troops. 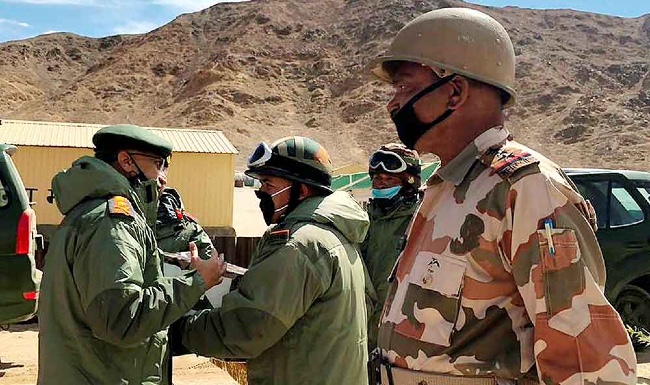 The threat in eastern Ladakh has "by no means reduced" and the Indian Army will continue to deal with the Chinese military in a "firm" and "resolute" manner, Chief of Army Staff Gen MM Naravane said on Wednesday referring to the 20-month-long border standoff that has seriously strained ties between the two countries.

His comments at a press conference ahead of Army Day on January 15 came on a day India and China held the 14th round of Corps Commander level talks to resolve the military standoff in eastern Ladakh. The Army chief asserted that China's new land boundary law was not binding on India and that the Indian Army is more than adequately prepared to deal with any military ramifications of the legislation.

Gen Naravane said his forces have been maintaining the highest level of operational preparedness in eastern Ladakh and the threat assessment and internal deliberations have resulted in re-organisation and re-alignment of the troops. Describing the situation in eastern Ladakh as "stable and under control", the Army chief referred to the resolution of issues through talks at certain friction points and said he was confident of finding solutions to the remaining ones.

"The situation is stable and under control. As I mentioned that talks are underway and when talks are underway, there is always hope that through dialogue we will be able to resolve our differences," he said. "What happens and whether a situation escalates or not is very difficult to foretell or predict. But whatever we have done so far, we are in a position to meet whatever is thrown at us in the future. That I can assure you very confidently," Gen Naravane said.

"War is always or conflict is always an instrument of last resort. But if resorted to we will come out victorious," he added. The Army chief said that India's response to the Chinese attempts to unilaterally change the status quo was "very robust" and it was able to thwart these designs.

"If you recall the situation, that existed last January, I think we can say, there have been positive developments, both along our Northern and Western Borders in the last one year," he said. Gen Naravane said the Army has continued to maintain the highest levels of operational preparedness along our Northern borders while engaging in sustained dialogue with the Chinese PLA.

He said after persistent joint efforts, mutual dis-engagement has taken place at many locations and that there has been positive movement. "The 14th round of the Corps Commander level talks is underway, and I am hopeful that you shall see further developments in the days ahead. But while there has been partial disengagement, the threat has by no means reduced. Force levels, in areas where dis-engagement is yet to take place, have been adequately enhanced," he said.

The Army chief said the threat assessment and internal deliberations, have resulted in re-organisation and re-alignment of forces and to cater for the major augmentation of the PLA forces, and military infrastructure. "We will continue to deal with the PLA in a firm, resolute and peaceful manner while ensuring the sanctity of our claims. Necessary safeguards are in place," he said.

His comments came on a day Indian and Chinese militaries held the 14th round of high-level talks on the eastern Ladakh row. Asked about his expectations from the talks, Gen Naravane suggested that the efforts will be to carry out the disengagement in Patrolling Point-15 (Hot Springs).

"We are hopeful that we will be able to resolve the issues at PP 15. Once that is done, we will go on to the other issues which predate the current standoff. We are hopeful that that too will get resolved from time to time," he said in an apparent reference to outstanding issues in Demchok and Depsang.

In this context, Gen Naravane said the fourth and fifth rounds of talks resulted in resolving the issue at Patrolling Point-14 while the ninth and 10th rounds helped in resolving issues at the North and South banks of Pangong Tso as also the Kailash ranges. "Then after a couple of rounds, we were also able to resolve the issue at PP17 (Gogra). We have to keep talking to each other. Every time we have dialogue, the differences keep getting narrowed down and then we reach a consensus," he said.

He further said:"To expect that every round will have an outcome is also quite unreasonable." Asked whether troops level and infrastructure along the Line of Actual Control will remain in force, Gen Naravane said de-escalation could take place following disengagement. The Army chief said once the friction areas are settled, the two sides may think of moving back from being bang on the LAC to areas in depth. "Once this kind of confidence is built up, we can think of de-induction wherein troops can go back to their permanent garrisons and locations," he said.

"But whatever we decide to do, will be based on the principle of mutual and equal security and that is always going to be our bottom line. Till we reach those stages, we will have to be prepared to stay there for as long as it requires," he said. The Chief of Army Staff said that the capabilities of the armed forces have increased manifold in the last one-and-a-half years as far as the Northern front is concerned.

"We have inducted additional troops, we have made various infrastructure and facilities for as many as 25,000 additional troops which had gone into that area," he said. "For all that we have done, we are in a much better position than we were a year, year-and-half ago. Also much better prepared to meet any challenge that is thrown up at us," he added. On China's land boundary law, he said that any law that is not in keeping with agreements that the two countries had entered into in the past cannot be binding on India.