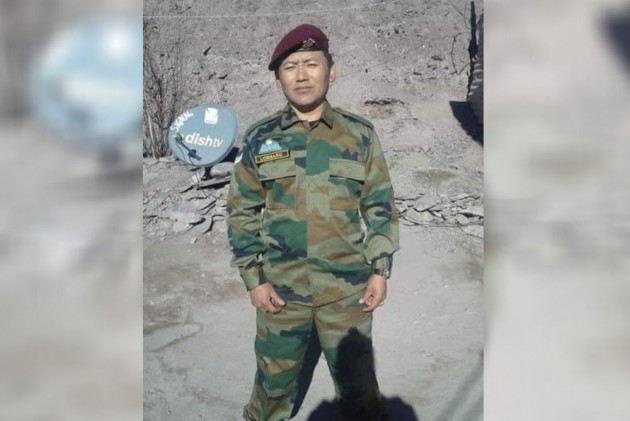 Amid waving of Tibetan flags and pro Tibet slogans, last rites of the Special Frontier Force officer Nyima Tenzin were performed in his village in Leh outskirts. A large number of people, mostly Tibetan refugees, carrying Tibetan flags were seen on the occasion. One of the banners read, “jai Tibet, jai bharat, jai vikas.”

The SFF, also referred as Vikas battalion, on August 30 mounted an offensive that led to control of some key heights along the LAC in Ladakh. The offensive, named as operation quid pro quo, was aimed to thwart occupation by Chinese advances. At the same time a senior Tibetan officer of the SFF Nyima Tenzin was killed in a landmine blast and another Tibetan Jawan was injured along the LAC. The officer was a resident of Camp No 1 Sonamling Tibetan settlement in Leh Ladakh. The injured soldier admitted at the Army base hospital Leh is stated to be out of danger.

The BJP leader Ram Madhav was also present at the ceremony.

Ram Madhav said he was hopeful that Nyima Tenzin's sacrifice would bring peace along the LAC. He said there is tension along the LAC at this time and efforts are on to have a peace in the area.