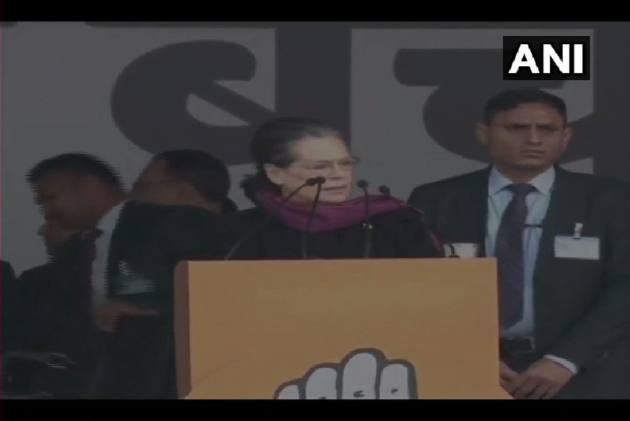 The time has come to save the country, said Congress Interim President Sonia Gandhi on Saturday addressing a Bharat Bachao rally in Delhi's Ramlila Maidan.

"There always comes a time when an individual, society or a country has to make a choice to stand either this way or that. Today, the time has come to save our country and we have to struggle hard for it," Sonia Gandhi said.

Hitting out at the ruling BJP government for revoking article 370 in Jammu and Kashmir and reducing the state to the status of a Union Territory after bifurcating it, Sonia said: Today the atmosphere is such that whenever (the government) feels like it, they impose an Article, revoke an Article, change the status of a state.

"Whenever they feel like it, they revoke the President's Rule and pass Bills without debate, Sonia Gandhi said addressing the mega rally, hinting at the recent Maharashtra political crisis and the passage of the controversial Citizenship (Amendment) Bill.

In Maharashtra, the then President's Rule in the state was revoked at 5:47 am and BJP's Devendra Fadnavis was sworn in as the Chief Minister.

The revocation was made possible by invoking The Government of India (Transaction of Business) Rules which gives the prime minister special powers.

"Modi-Shah are not bothered at all that the Citizenship Amendment Act will shred the soul of India, just like it is happening in Assam and other states of the northeast," she said.

Earlier in the rally, Rahul Gandhi, who has been caught in a controversy over his "rape in India" remark at a Jharkhand rally, said that he will not apologise as demanded by the Centre.

"Let me tell you that I won't apologise because my name is Rahul Gandhi and not Rahul Savarkar, he said adding, "I will never apologise for speaking the truth and nor will any Congressman do so."