Rattled by the formation of People’s Alliance for Gupkar Declaration, BJP’s J&K chief accuses it of being anti-national. 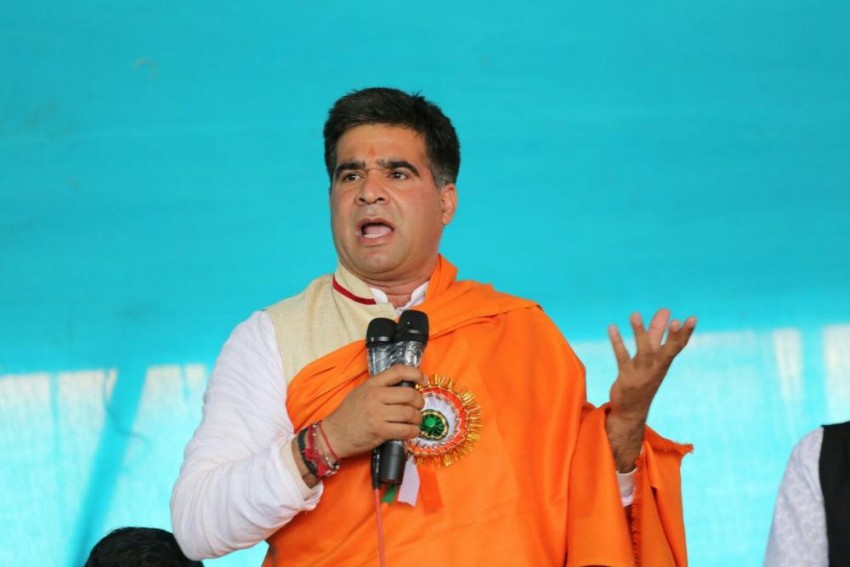 The formation of the People’s Alliance for Gupkar Declaration in Kashmir has unnerved the BJP. Fearing that it could turn into a grand alliance against the BJP in Jammu and Kashmir, the party chief in J&K accused the alliance partners of working on behalf of China and Pakistan, and said the time has come to liberate Aksai Chin, Shaksgam Valley, Gilgit and other areas from China and Pakistan.

BJP J&K President Ravinder Raina said his party will fight against Pakistan and China and identify those carrying out the agenda of these countries. He said PoJK, Gilgit, Baltistan, Aksai Chin and Shaksgam Valley are integral parts of India, and are presently illegally occupied by China.

"Now Article 370 has been abrogated and we will unitedly fight against Pakistan and China and defeat their agenda, as we will also identify those carrying on their agenda in our soil," Raina said. He said Pakistan and China are carrying atrocities on people living in POJK, Gilgit, Baltistan, Eastern Ladakh and Shaksgam Valley. "PoJK, Gilgit, Baltistan, Aksai Chin and Shaksgam Valley are integral part of India and are presently illegally occupied by China, this is the time when we should unitedly move to liberate these areas from occupation of Pakistan and China," he added.

Addressing a joint meeting of about a 100 people representing different religious and social organisations in Jammu to discuss the implications of the People’s Alliance, he said: “This is the time when we should unitedly move to liberate these areas from occupation of Pakistan and China,” and the formation of the “joint alliance by NC and PDP under Gupkar agenda is an agenda of anti-national forces” who want to destabilize the situation in Kashmir.

“After abrogation of Article 370, common masses in Jammu, Kashmir and Ladakh jumped with joy as they would see Article 370 doing criminal injustice with them,” he said, adding that a conspiracy is being hatched by Abdullahs and Muftis against the country and his party will not tolerate this anti-national move. “The alliance has nothing to do with the betterment of the people of J&K. The alliance partners are just dancing to the tunes of Pakistan and China and demanding the restoration of Article 370 which is next to impossible,” he said.

“Article 370 had given birth to separatism and terrorism and also tried to develop Pakistanism in J&K, which gave rise to terrorism in which thousands of innocent people got killed,” he said.

The parties in the People’s Alliance for Gupkar Declaration have pledged to fight for the restoration of Article 370 and insisted on the resolution of Kashmir issue.