Lawyers in six district courts in Delhi have been on strike since November 4 to protest against the clash with police Personnel. 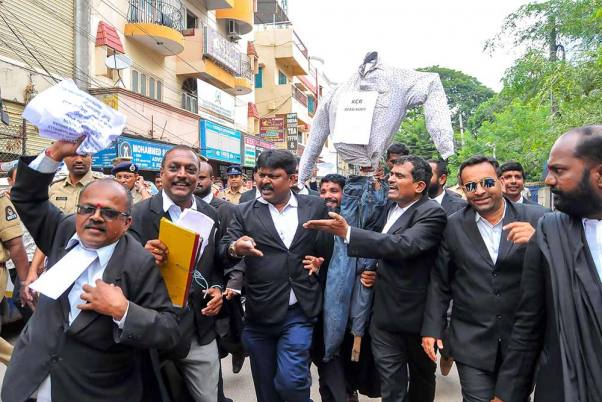 Lawyers in all the six district courts in the national capital continued to abstain from work on Friday to protest against the clash between advocates and police at Tis Hazari court early this month.

The proxy counsels appeared in courts to take dates in matters and assist the litigants.

Dhir Singh Kasana, general secretary of the coordination committee of All District Courts Bar Associations in Delhi, said that advocates of all the district courts in Delhi will protest outside the Parliament on November 20.

Important cases have been deferred due to non-appearance of counsels, including the judgement in the case of alleged sexual and physical assault of several girls at a shelter home in Bihar's Muzaffarpur.

The strike continues as a meeting of members of all district courts associations, representatives of the Delhi Police and Lt Governor Anil Baijal, held on Sunday on the orders of the Delhi High Court, failed to find a resolution, Kasana said.

The tension between police personnel and lawyers has been building up since November 2 when a clash over a parking dispute led to at least 20 security personnel and several advocates injured.

In unprecedented protests by the Delhi Police, thousands of its personnel had laid siege outside the police headquarters for 11 hours on November 5 and staged a virtual revolt sparked by two attacks on their colleagues by the lawyers