Chakraborty got the jab at a free Covid-19 inoculation camp being held in the city's Kasba area earlier in the week. 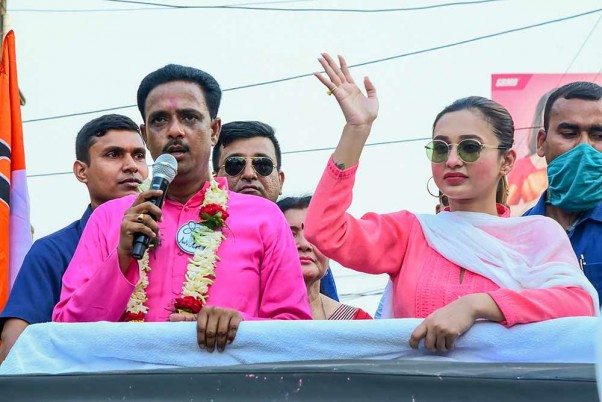 Trinamool Congress Member of Parliament (MP) Mimi Chakraborty's health has reportedly deteriorated days after she took a fake vaccine shot at a camp held in Kolkata earlier in the week. According to reports, the Jadavpur MP and former actor is currently undergoing medical treatment after experiencing stomach ache and issues with her gall bladder ever since she took the spurious shot.

Chakraborty got the jab at a free Covid-19 inoculation camp being held in the city's Kasba area. The MP, however, alerted cops after she grew suspicious of the camp, resulting in police busting the camp and arresting the man responsible for organising the fake camp.

The person, identified as Debanjan Deb, had set up the free inoculation camp and posed as an IAS officer, introducing himself as a joint municipal commissioner of the Kolkata Municipal Corporation, a senior officer of Kolkata Police said.

"Several people were administered Covid vaccines at the camp for which he had no permission from the KMC," he said. "We have sent the vaccine samples for forensic tests.

If these turn out to be fake, we will have to ask all those who have been inoculated there to take the jab again," the officer added.

Chakraborty said she was in doubt after being inoculated as she did not receive the customary SMS that is sent to people after they are administered a dose.

"I had got an invite to the camp, where I was told members of the third gender will also be inoculated. When I did not receive the message after my vaccination, I immediately stopped the entire process at the camp and informed the police," Chakraborty said.

Outgoing Mayor and Chairman of the KMC Board of Administrators Firhad Hakim said if any official of the municipal corporation is found to be involved in the matter, the person will face strict action.

Police have recovered a "fake identity card" and impounded a four-wheeler from the possession of the accused.