TMC Operates Like A Private Company With No Regard For Democracy: Suvendu Adhikari

‘Without BJP’s help, TMC would have ceased to exist after 2001,’ Adhikari said 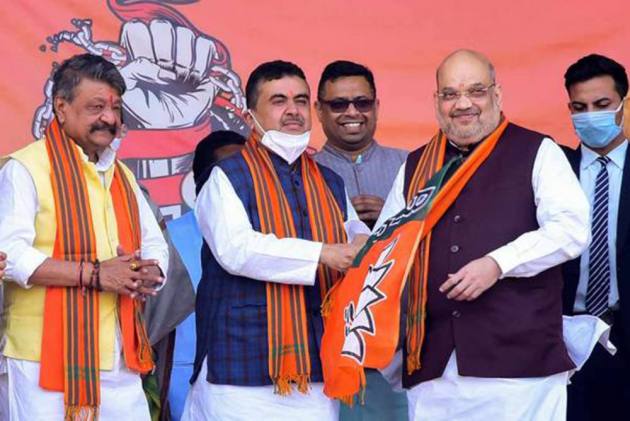 Calling upon people to dislodge the "corrupt" Trinamool Congress (TMC) government in West Bengal, newly inducted BJP leader Suvendu Adhikari on Tuesday said "opportunist" members of the ruling party had, in the past, solicited help from the BJP and the Congress for survival, only to ditch them later.

Making light of his assertion, TMC spokesperson Kunal Ghosh said that the former state minister might have forgotten he was a member of the Mamata Banerjee-led party until recently.

Adhikari, while addressing his first public meeting after joining the saffron party last Saturday, also labelled the TMC as a "private company", which does not believe in upholding democratic principles.

He underscored that the TMC would have perished in 2001, had it not taken help from the BJP after coming into existence in 1998.

“Had BJP heavyweights like Atal Bihari Vajpayee and L K Advani not come to the aid of the fledgling TMC during the successive Lok Sabha polls, Assembly polls and panchayat polls after 1998, it would have ceased to exist after 2001.

"In 2004, the TMC contested Lok Sabha elections as an NDA partner, and I had held the TMC flag in one hand and BJP flag in another," the 50-year-old leader said.

Similarly, the TMC supremo (Mamata Banerjee) had taken help of the Congress in 2011 Assembly polls to defeat the Left, forgetting that she had deserted the same grand old party to form her own outfit earlier, he pointed out.

Stressing that none but the BJP had extended support to the TMC during the Nandigram agitation over land acquisition, Adhikari said, "After mass killings on March 14, 2007, a BJP delegation consisting of Rajnath Singh and Sushma Swaraj had visited the area. The saffron party had stalled parliamentary proceedings for over 60 days in protest against the firing."
People of the state, back in 2011, had voted for "paribartan" (change of guard), but in reality corruption and extortion increased, and that went on till Union Home Minister Amit Shah "put a lid on all illegal activities", the former state transport minister said.

"Also, there was hardly any development activity or employment generation under the TMC regime. There are over two crore unemployed people in the state now," he said.

Over 73 lakh farmers are not getting benefits of Prime Minister Narendra Modi's PM-Kisan Saaman Nidhi Yojana due to the "rigid stance" of the state government, the former lawmaker maintained.

Claiming that many welfare projects announced by the Mamata Banerjee dispensation are "non-starters and empty promises", he said the much-hyped 'Duare Sarkar' project of the TMC government should be rechristened as 'Jomer Duare Sarkar' (government at the gates of hell).

Countering allegations of TMC leaders, who said that he betrayed the party ahead of Assembly polls, Adhikari said "I am not a traitor. I have not sacrificed morality. I had resigned from all posts before joining the BJP without setting any pre-condition. Can those criticising me say for sure that the TMC treats its members with respect? It is a private company with no regard for democracy," he said.

"Most people did not receive houses under the PM's housing project for the poor. A portion of the funds disbursed was pocketed by TMC leaders. Those affected during Cyclone Amphan did not get the Rs-20,000 relief allotted for each family.

"Who got the money? It's the TMC leaders. Didi was complaining of not getting central help after the cyclone, but the fact is that Rs 1500 crore disbursed by the Union government for relief and rehabilitation was not properly utilised," Ghosh said.

Taking a jibe at Adhikari over his remarks, the TMC spokesperson said, "He is talking like a child. He has forgotten he was with the Mamata Banerjee-led until recently and raised “Modi Hatao” slogans even a few days ago."

Assembly elections are likely to be held in Bengal during April-May, next year.