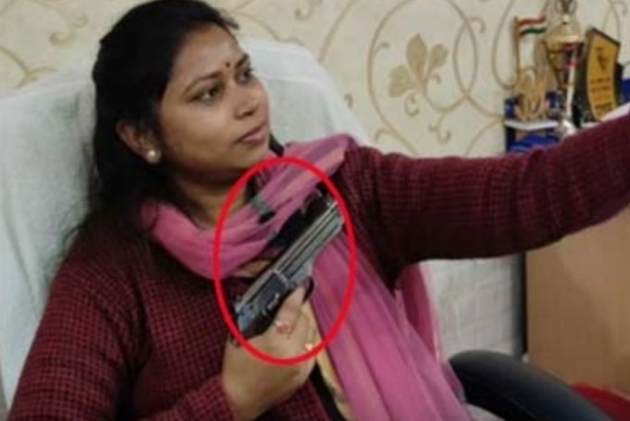 In the image, Maity who is also the president of the district unit of TMC women's wing can be seen holding a gun in her hands she poses for a selfie inside her office.

This purported photo of TMC leader Mrinalini Mondal Maity posing with a gun in her government office has gone viral on social media. She is the president of Malda district unit of TMC women's wing and heads the old Malda Panchayat Samiti. TMC says police will look into the matter pic.twitter.com/1LgdSK3lZ2

The incident has caused embarrassment for the ruling party in Bengal with opposition leaders targeting the party over the viral photo. The BJP accused the ruling party has turned the state into a dump yard of explosives.

"If she is searched, police will also get bombs and rifles. This is TMC's culture. Police are not doing anything out of fear of losing their jobs," said BJP district president Gobinda Chandra Mondal.

The BJP Bengal handle also tweeted in response to the incident. "Attempts to assassinate democracy continues. Democracy is dying a painful death in Bengal!" the party said.

The BJP, however, is no stranger to gun-toting politicians. In 2017, photos of a BJP leader in Jammu and Kashmir, Ashish Sareen, posing with an AK-47 rifle went viral on social media. The BJP later responded by saying that Sareen was not an active member of the party.

In 2019, the party suspended Uttarakhand MLA Pranav Singh Champion for six years after he was seen dancing with weapons inside a house party in a video that also went viral.

Meanwhile, TMC's Mrinalini Mondal Maity has remained unavailable for comment. The party, however, has said that the police would look into the matter. "One cannot play with a gun while sitting on an official chair. Police will investigate if it is a real gun or a toy pistol. But, what I could gather from the photo, it is a real gun. The party's image has been dented because of such an incident," said TMC state general secretary Krishnendu Narayan Chowdhury.

This is not the first time that Maity's name has cropped up amid controversy. Earlier, her husband was accused of beating up a government official in the office of the Block Development Officer of the area.