Finance Minister Palanivel Thiaga Rajan announced on Monday that if the total public debt of Rs.5.70 lakh crore of Tamil Nadu is shared among the state’s public, every family owed Rs. 2.63 lakhs as debt. 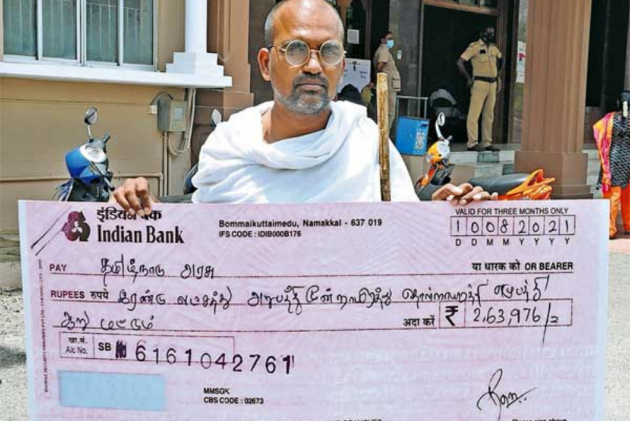 Rs.2,63,876 – the figure has been doing the rounds on social media ever since Tamil Nadu’s Finance Minister Palanivel Thiaga Rajan announced on Monday that if the total public debt of Rs.5.70 lakh crore of Tamil Nadu is shared among the state’s public, every family owed Rs. 2.63 lakhs as debt.

Ever since the Minister arrived at that figure while releasing the white paper on the state’s finances, netizens have come up with their own response. While most resorted to memes and jokes on social media, one dutiful resident decided to actually pay up his portion of the public debt.

Ramesh (41), a Gandhian farmer living at Bommaikuttaimedu in Namakkal district, marched to the office of the local Revenue Divisional Officer on Tuesday morning with a cheque for Rs.2,63,876 drawn in favour of “Tamil Nadu Government.” To make sure that his sincere attempt did not go unnoticed, he had also brought a blown-up photocopy of the cheque to publicize his intent.

When Ramesh presented the cheque to the RDO, the official refused to accept it informing Ramesh that he was not authorized to receive the payment which should be given to his superiors. So Ramesh went to the Namakkal district collector’s office only to find that the collector had gone out for inspection. “I would return another day but I am really serious about this as I feel every citizen should come to the government’s aid by paying their share of the public debt,” he said.

Ramesh also suggested that the government can give loans of Rs.15 lakhs to citizens who pay their debt. “Citizens can use these loans to start their own small business which would help the economy grow. And they should not fail to repay these loans,” he said.

On the lighter side, the meme that went viral was one showing young Youtube star Rithu’s spoof on news channels with the anchor asking the reporter: “When will the promises made in the DMK manifesto be implemented?” The reporter replies, “Instead they are asking when will you pay your debt of Rs.2,63,976?”