'Soniaji had invited me for a cup of tea. We discussed the political situation in the country. We also discussed the issue of opposition unity,' Mamata Banerjee said 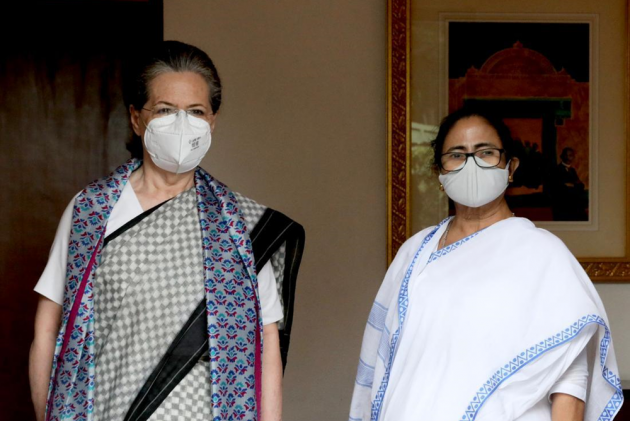 As part of her series of outreach meetings in Delhi, West Bengal Chief Minister Mamata Banerjee met Congress president Sonia Gandhi at her residence on Wednesday. Rahul Gandhi was also present at the meeting.

"To defeat the BJP, all of us have to come together and work together," Banerjee said on opposition unity.

Describing the meeting as "positive", Banerjee said she discussed the political situation in the country as well as opposition unity with the Gandhis.

‘I’m Not A Political Astrologer’: Mamata Banerjee On Being The Face Of Opposition

"It was a very good meeting," the Trinamool Congress (TMC) supremo told reporters after the deliberations that lasted for around 45 minutes, adding that she is expecting positive results in the future.

"Soniaji had invited me for a cup of tea. We discussed the political situation in the country. We also discussed the issue of opposition unity," she said.

She said she also discussed the Pegasus spyware issue with the Congress chief.

The TMC supremo has been reaching out to various opposition leaders in a bid to bring together the non-BJP forces ahead of the 2024 Lok Sabha polls.