To Oust Me From Power, Congress, Left Will Stoop To Any Level: PM Modi

Addressing a rally in Udaipur, Modi said the people of Tripura has set a precedent for the entire country by ousting the Left Front government after 25 years. 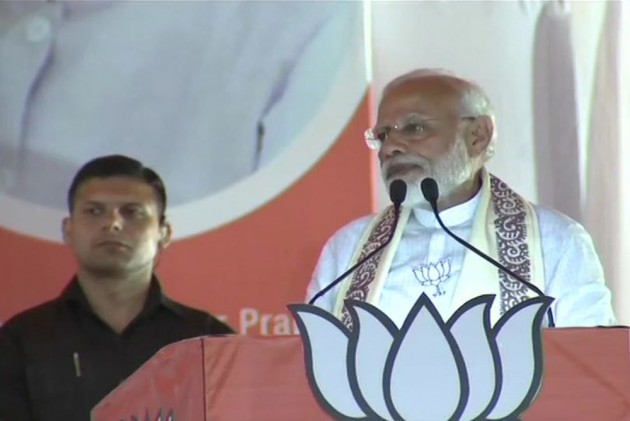 Hitting out at the Congress and the Left Front, Prime Minister Narendra Modi said Sunday the opposition parties were hell-bent on removing him from power, even if that meant singing paeans to Pakistan.

Addressing a rally in Udaipur, Modi said the people of Tripura has set a precedent for the entire country by ousting the Left Front government after 25 years.

"Mamata Banerjee's Trinamool Congress has been trying its best to make inroads into Tripura, but people here would not let that happen. They have tolerated the atrocities of the Left Front, waiting patiently for the BJP to rise. I thank the people of Tripura for believing in the BJP," he stated.

Modi asserted that the opposition parties could stoop to any level to remove him from power.

"The Congress and the Left are working together to oust Modi. They have stooped too low, singing paeans to Pakistan even when the NDA government was taking on the terrorists on the soil of the neighbouring country.

"In Tripura, they (Left and Congress) are fighting each other, but in Delhi they stand united, holding each other's hand. If there was no help from the Left, or there was no game behind the curtains, why would the namdar of the Congress go to Kerala for the contest?"

Congress chief Rahul Gandhi is contesting the general election from Wayanad in Kerala and Amethi in Uttar Pradesh.

"If he (Rahul Gandhi) wanted to contest from South, he could have gone to Pondicherry or Karnataka. He could have also gone to Andhra Pradesh, where the Congress has recently forged friendship with U-turn babu, or to Madhya Pradesh, Rajasthan and Chhattisgarh."

Modi has coined the moniker "U-turn babu" for Telugu Desam Party (TDP) chief Chandrababu Naidu, who pulled out his party of the NDA in March 2018.

"He (Gandhi) would dare not enter Punjab as people there haven't forgotten the 1984 (anti-Sikh) riots," the prime minister added.

Taking a jibe at the Congress manifesto, Modi said, "The grand old party came out with its 50-60 page hypocrisy document, where there is no mention of middle-class.

Attacking the Left parties, the prime minister said they consider their "party's constitution bigger than that of the country's".

"The Left parties don't want to give the country a direction. They are only keen on furthering their own interests in the country," Modi said.

Heaping praise on Chief Minister Biplab Deb, he said the state government has improved the law and order situation and developed infrastructure in just one year.

"Our government has started procuring agricultural produces from the farmers directly. The middlemen and the moneylenders have suffered a setback," he claimed.

Under the Saubhagya scheme, the NDA government has ensured power connection in almost all homes in the state, the prime minister noted.

"As promised before the assembly election, we have initiated work on broad gauge rail line, built bridges, started train services, connecting Agartala with other parts of the country. Work is also underway to give Maharaja Bir Bikram Airport an international makeover," he said, adding that his government has taken adequate measures to ensure safety of women and children.

Election to two Lok Sabha seats in Tripura will be held on April 11 and 18.