To Protest Killings Of Party Workers, BJP To Observe 'Black Day' Across Bengal On Monday

The party has also called for a 12-hour general strike in the Basirhat sub-division on Monday, and a 'condemnation march' to the Kolkata Police headquarters in Lalbazar on June 12. 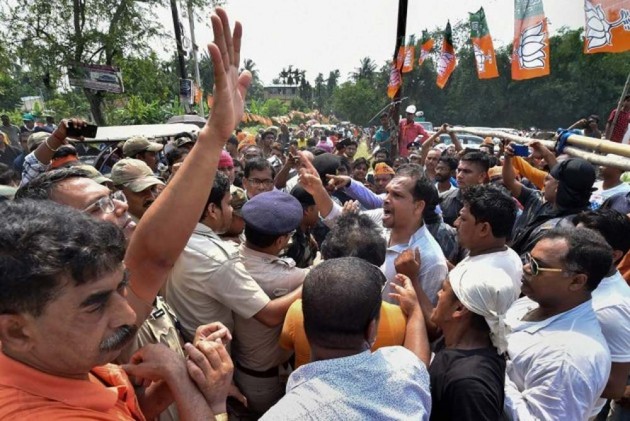 In a bid to protest against the killing of their party men in West Bengal's North 24 Parganas district a day ago, the Bharatiya Janata Party (BJP) will observe 'Black Day' across the state on Monday, a senior state BJP leader said on Sunday.

The party has also called for a 12-hour general strike in the Basirhat sub-division on Monday, and a 'condemnation march' to the Kolkata Police headquarters in Lalbazar on June 12.

"We condemn the role of the police and the state administration who acted like silent spectators when our workers were killed by Trinamool goons. We will hold 'Black Day' across Bengal tomorrow. Also, there will be a 12-hour general strike across the Basirhat subdivision," BJP national Secretary, Rahul Sinha said.

"To protest against the complete lapse of law and order in Bengal, we will hold a mega condemnation rally in Kolkata on June 12," he added.

The rally will start from Wellington Square and go to Lalbazar, the leader said.

Earlier, a saffron party delegation was stopped by the police from bringing the bodies of two of its slain workers from Sandeshkhali, in North 24 Parganas district to Kolkata.

The bodies were then sent back to Sandeshkhali for performing the last rites.

A severe clash broke out between Trinamool and BJP workers in Sandeshkhali's Hatgachi area, over the removal of saffron party flags on Saturday afternoon.

The police have so far confirmed the death of three political workers, two from the BJP and one from the Trinamool, though the two warring parties claimed more casualties.

While the BJP claimed that four of their workers were shot dead, and several others went missing, the Trinamool alleged that three of their supporters were killed.

Violence broke out after TMC workers allegedly removed BJP flags from a building in Basirhat.