To Punish Or Not To Punish: Prashant Bhushan's Defiance Puts SC In Stalemate

Bhushan’s submission may go down in history books both as the mark of an individual committed to his ideals, irrespective of the personal cost they may extract, and as yet another dark episode that the apex judiciary could have done without. 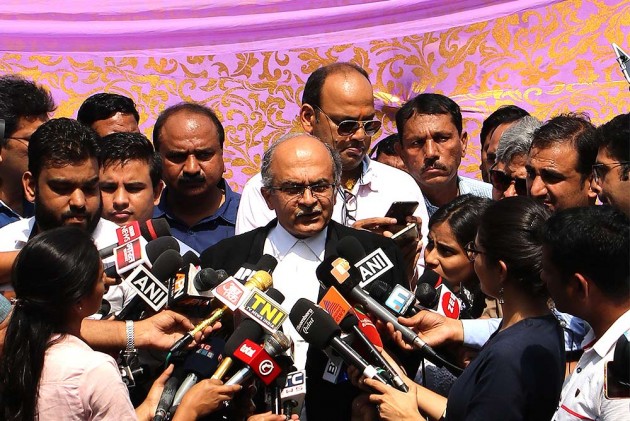 It is difficult to explain what really went on in the Supreme Court, on Thursday, as a three-judge bench led by Justice Arun Mishra concluded hearing arguments on the quantum of punishment to be awarded to lawyer Prashant Bhushan, who had been held guilty of contempt of court by the bench on August 14. After spending nearly an hour vociferously rejecting arguments for deferring pronouncement of a sentence pending a review of the conviction, the bench spent the next hour convincing Bhushan on why the court believes the pronouncement of punishment should be delayed by “2-3 days”.

Bhushan, on his part, stood his ground, even telling the court at one point that he will not change his statement rejecting any possibility of an apology over his “contemptuous” tweets against Chief Justice of India S.A. Bobde and on the role of the last four chief justices of India in what the lawyer had dubbed as “destruction of democracy”. In a strongly worded statement Bhushan told the court: “My tweets are nothing but a small attempt to discharge what I considered to be my highest duty at this juncture in the history of our Republic. I did not tweet in a fit of absent mindedness. It would be insincere and contemptuous on my part to offer an apology for the tweets that expressed what was and continues to be my bona fide belief”. Bhushan’s submission may go down in history books both as the mark of an individual – irrespective of how polarizing he may be – committed to his ideals, irrespective of the personal cost they may extract, and as yet another dark episode that the apex judiciary could have done without.

Paraphrasing one of Mahatma Gandhi’s quotes, Bhushan also told the court, “I do not ask for mercy. I do not appeal to magnanimity. I am here, therefore, to cheerfully submit to any penalty that can be lawfully inflicted upon me for what the Court has determined to be an offence, and what appears to me to be the highest duty of a citizen.”

'I Do Not Ask For Mercy... It Would Be Insincere To Offer Apology': Prashant Bhushan To SC

Not Power Of Contempt But Reputation Shields Judiciary Against Malice

Why I Defend Prashant Bhushan’s Right To Offend

Bhushan’s statement before the bench, also comprising Justices BR Gavai and Krishna Murari, came shortly after senior advocate Dushyant Dave argued that the sentencing must be put on hold till a petition seeking a review of Bhushan’s conviction in the contempt case is filed and decided by the Supreme Court. Justice Mishra had, however, stridently rejected the suggestion that pronouncement of sentence be put in abeyance. Dave’s request for allowing a different bench of the apex court to decide the quantum of punishment was also rejected by the bench, with Justice Gavai stating that an impression cannot be allowed to gain ground that there was an effort by lawyers of the accused to “avoid the bench of Justice Mishra”.

Insisting that the hearing on and pronouncement of the sentence is consequential to Bhushan’s conviction, Justice Mishra had told Dave, the judgment by his bench “will be complete only when it is totally pronounced.” The bench asserted that Bhushan was free to seek a review of his conviction and also the sentence. Responding to Dave’s arguments against pronouncing the punishment during Thursday’s proceedings, the bench had also assured Bhushan that “in the event we impose any punishment… it will not be activated until the review is decided.” The assurance essentially meant that the court was willing to suspend activation of the punishment awarded to Bhushan till such a time that the review sought by him was decided by the court.

In a surprising turn of events, even Attorney General KK Venugopal, who the bench had asked to assist in the contempt case, urged the judges to not punish Bhushan. The bench categorically told Venugopal that it was “not inclined” to even consider his proposal and instead told the Attorney General that he must go through Bhushan’s statement rejecting any chance of apologizing to the court and decide for himself whether it comprises “defence or aggravation”.

However, the court’s perceived steadfastness for pronouncing the sentence seemed to dissipate after Bhushan made his statement before the bench and senior advocate Rajeev Dhavan explained why, in his view, the conviction was based on flawed interpretation of the law of contempt. Dhavan also told the bench that several former judges of the Supreme Court, thousands of lawyers and highly regarded public intellectuals had expressed solidarity with Bhushan and held that the contempt proceedings “are wrong”.

While Dhavan punched holes in the court’s rationale behind the conviction, the bench asked Bhushan if he would reconsider his statement made earlier during the proceedings. When Bhushan replied in the negative, adding that it “will be a waste of the court’s time”, Justice Mishra insisted that the court “wants to give you 2-3 days’ time… think over; you must think over. We should not give the verdict right away”.

With Bhushan standing his ground and Dhavan arguing that the law of contempt had been wrongly applied in the case, the bench concluded the day’s hearing without announcing when the matter may be listed next.

Since arguments on sentencing have concluded, it is likely that the court may list the case for pronouncement of punishment on Monday. With public support growing every day in favour of Bhushan and the court’s verdict coming under severe criticism even within the legal fraternity, the bench finds itself in an unenviable position. Having held Bhushan guilty, it cannot go back on its verdict as it would only bolster the impression that the court was ‘going after’ the lawyer for raising pertinent but uncomfortable questions about the judiciary. Bhushan is unlikely to reconsider his refusal to apologise. The court is now in a stalemate; one of its own making.