PM Modi Is Now A Prisoner Of His Own Lies: Rahul Gandhi On Alok Verma's Transfer

Alok Verma, CBI Director's transfer has been taken barely 48 hours after the Supreme Court reinstated the officer, who was on leave following a public spat with his deputy Rakesh Asthana. 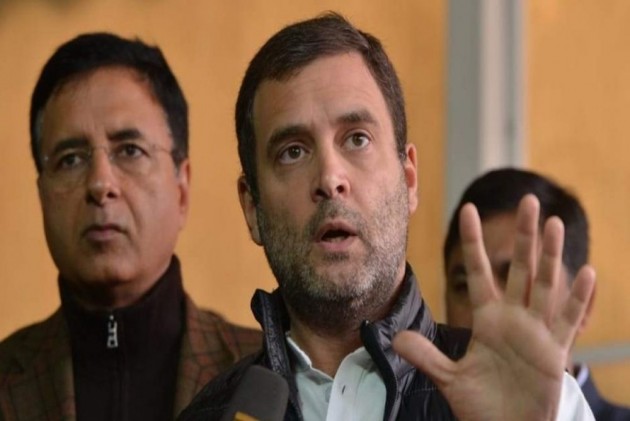 The Congress on Thursday launched a sharp attack on the government over removal of CBI Director Alok Verma, with party chief Rahul Gandhi saying the second-time sacking of the probe agency chief showed Prime Minister Narendra Modi was a "prisoner of his own lies" and there was fear in his mind over alleged corruption in the Rafale aircraft deal.

The opposition party termed the government's action as a "gross miscarriage of justice" and alleged that the prime minister was trying to protect his and his government's "wrong-doings" by appointing a "pliable officer".

Barely two days after the Supreme Court reinstated him, Verma was removed as CBI Director by a high-powered committee headed by Prime Minister Modi on charges of corruption and dereliction of duty, in an unprecedented action in the central probe agency's 55-year history.

He said the present CVC had no authority to form a panel of officers as mandated under the law.

Sharma also alleged that the CVC was acting at the behest of the Prime Minister’s office.

He demanded an independent probe monitored by the Supreme Court into the events of October 23/24 night when Verma was removed as CBI Director in a 'midnight operation'.

“Fear is now rampaging through Mr Modi’s mind. He can’t sleep. He stole 30,000Cr from the IAF and gave it to Anil Ambani. Sacking the CBI Chief #AlokVerma twice in a row, clearly shows that he is now a prisoner of his own lies. Satyamev Jayate,” Gandhi tweeted.

"By removing #AlokVerma from his position without giving him the chance to present his case, PM Modi has shown once again that he's too afraid of an investigation, either by an independent CBI director or by Parliament via JPC,” the Congress said on its Twitter handle.

Addressing a press conference, Sharma said, “It is not only a gross miscarriage of justice, it's a travesty... that we have a situation where even the basic tenets of natural justice have been thrown to the winds by none other than the committee chaired by the PM."

He alleged that the prime minister was stopping the CBI from investigating himself and his ministers, an obvious reference to the alleged corruption in the Rafale aircraft deal.

Sharma also supported Mallikarjun Kharge’s views that Verma has the right to present his case and alleged that the government did not want the CBI to investigate certain cases.

Sharma alleged that the prime minister was preparing a 'Suraksha Kavach' for himself and his friends so that the acts of “omissions and commissions” under him are not looked into for the next two years.

He alleged that the decision has further dented the reputation of the CBI.

While there was no immediate comment available from the PMO, the BJP termed the Congress a "sore loser", saying the party has been left to lick its wounds "after failing to subvert the central probe agency by joining internal personal battles".

To the BJP’s charges, Sharma said the prime minister wants to “compromise” the investigating agency to target opposition through political vendetta.

“They are uncomfortable with an independent CBI with the authority under law to investigate or probe any matter, any person in high authority and to act according to the law for any act of omission, commission or irregularioty.