The new year, 2021, and the new decade, promise to be equally eventful. 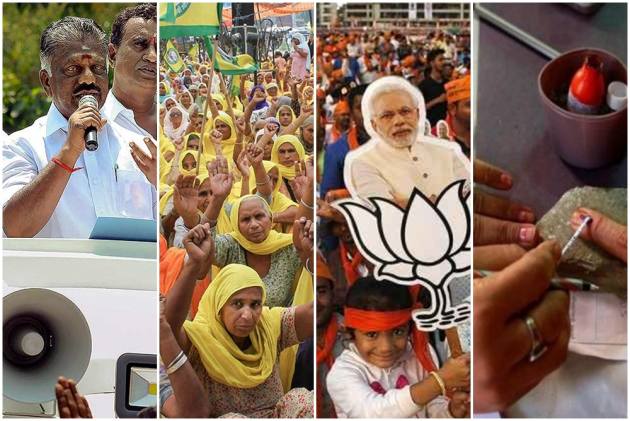 While a large part of the year 2020 was spent under lockdown amid the fear of coronavirus, there were stirrings of political activity with Bihar Assembly elections and ground-breaking ceremony for the construction of the Ram temple at Ayodhya. The anti-CAA stir, Delhi riots and farmers’ protests kept the government and the administration on the edge. The new year, 2021, and the new decade, promise to be equally eventful.

Here are  the 10 big political developments to look out for in 2021:

Challenges before the Narendra Modi government

The worst of the Covid-19 pandemic may be over but the government will have to face the challenge of the vaccine rollout with issues of access and cost dominating the discourse. The Narendra Modi government also has to deal with the sliding economy, lost jobs and unemployment, in addition to the farmers’ unrest and the Census exercise that can become controversial. The government’s legal team has to contend with Supreme Court cases like petitions challenging the constitutional changes in Jammu and Kashmir, the Citizenship Amendment Act (CAA) and farm laws. On the diplomacy front, the China standoff continues, Nepal remains belligerent, Pakistan remains hostile and there is a new dispensation in the US to deal with.

Despite half a dozen rounds of talks between the government and the protesting farmers, camping at the borders of the Capital, there are no significant signs of a breakthrough. While the government is willing to promise them leniency for stubble burning and dropping amendments to the Electricity Ordinance, it is unwilling to sign off on the Minimum Support Price (MSP). The farmers, as of now, want nothing less than revocation of the three farm laws. The laws have already cost the government some of its allies including the Shiromani Akali Dal (SAD), they are likely to have a long-term bearing on BJP’s electoral prospects.

Having a thumping majority in Parliament, the BJP will remain in a commanding position. It has not allowed the pandemic to come in its way of expanding its political base and the trend will continue more aggressively this year as the party goes into crucial Assembly elections. The stakes are high for the BJP as it wants to capture West Bengal, expand its base in the southern states of Tamil Nadu and Kerala and retain Assam.

The battle for West Bengal between Mamata Banerjee and a combative BJP is likely to be a volatile and polarising affair with both sides pulling all stops to win. The saffron party has been expanding its base in the state and increased its tally from two to 18 seats in 2019 Lok Sabha elections. Its vote share also spiralled from 18 per cent to 41 per cent. The BJP that has 23 members in the 294-seat Assembly, is aiming to topple the Mamata-led TMC government and has set itself a target of winning 200-plus seats. The Congress and Left are likely to contest together and the entry of AIMIM in the electoral fray has added an interesting twist to the battle.

The Assembly polls in Assam will test the BJP’s strength and appeal in the Northeast. Soon after coming to power in 2014, the BJP had announced its intention of expanding in the Northeast and other states where it traditionally did not have a strong base. Assam was the first state where BJP managed to install its government in the region in 2016. With rumblings regarding National Register of Citizens (NRC), the BJP has a fight on its hands in the state.

Assembly elections in Tamil Nadu, Kerala and Puducherry will also be keenly watched as the BJP has been trying to make a foray into the southern states. These will be the first elections in Tamil Nadu without its two stalwarts M. Karunanidhi and J. Jayalalithaa, who dominated the political landscape of the state for decades. BJP is still largely seen as a ‘Hindi-speaking party’. While it has tied up with the AIADMK, it is unlikely that BJP will make an impact in the southern heartland.

Elections in Kerala are important for the Congress to see whether the party is able to repeat its Lok Sabha election success and for the Left to retain control over the last state. Kerala will also be a test for the BJP, which tried the Hindutva card on the Sabarimala temple entry issue. Kerala is known to reject right-wing ideology and so far there are no indications that the voters may change their mind this time around.

Knowing how much in advance the BJP starts working on electoral strategy, the party is likely to seriously start working on UP elections, scheduled in early 2022, by mid-2021. Done with elections in east and south by mid-2021, the electoral battlefield will shift to north and west soon after. Yogi Adityanath government is expected to focus on the Ram temple construction, laws like ‘love jihad’ and anything that keeps the atmosphere polarised. The Congress too is banking on improving its performance in the state with Priyanka Gandhi Vadra, general secretary in charge of the state. However, there doesn’t seem to be any indication of any winds of change. Other parties in the state, SP and BSP, seem to be demotivated. They will need to work hard to shake-up the electoral landscape in the state.

In addition to UP, elections are also due in Punjab, Uttarakhand, Goa, and Manipur in 2022 – all posing a challenge to the BJP. The party will work on strengthening its organisation in Punjab where it was a junior partner to SAD. The saffron party is gearing to go alone in the state and unlikely to make any impact unless it manages to appease the farmers. It was also touch and go for the BJP in Goa, which managed to form the government despite the Congress winning more seats but falling short of a majority. The Congress is banking on retaining Punjab and winning Goa and Manipur.

Constantly in chaos, the Congress has promised an AICC session in early 2021. It’s going to be a make or break year for the grand old party. There are some questions that the party needs to answer. Will it elect a new president with Sonia Gandhi being an interim chief. Will the Gandhis give up claim to its leadership and allow someone outside the family to take over the reins? Will there be a rebalancing of power within the Gandhi family with Priyanka Gandhi playing a more active role? Will Rahul Gandhi take over as party President, albeit a reluctant one? Answers to these questions will decide the fate of the Congress, and of Rahul Gandhi.