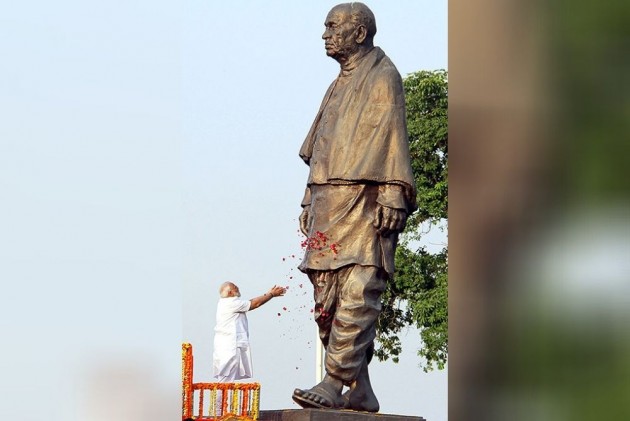 The top dignitaries paid their tributes to the first home minister of independent India at his statue located at Patel Chowk, New Delhi.

In a series of tweets in Hindi, Shah said the country's first home minister is an epitome of national unity and lives in the heart of every Indian.

He said Sardar Patel united the nation post Independence, which was scattered in hundreds of princely states, and laid the foundation of today's strong India.

"The country can never forget his great contribution, decisive leadership and unparalleled commitment towards the motherland," he said.

The home minister also said that from uniting India to reconstruction of the Somnath Temple, Sardar Patel devoted each and every moment of his life, for the unity and integration of the country.

"Iron willed leadership, devotion and patriotism of Sardar Patel ji will continue to guide us.

"On behalf of a grateful nation, I pay my respects to Sardar Patel, a great patriot and Iron Man of India," he said.

"I solemnly pledge that I dedicate myself to preserve the unity, integrity and security of the nation and also strive hard to spread this message among my fellow countrymen.

"I take this pledge in the spirit of unification of my country which was made possible by the vision and actions of Sardar Vallabhbhai Patel. I also solemnly resolve to make my own contribution to ensure the internal security of my country," read the pledge.

The Centre observes October 31 across the country as a day to foster and reinforce the government's dedication to preserve and strengthen the unity, integrity and security of the nation by celebrating it as the "Rashtriya Ekta Diwas" or "National Unity Day" to commemorate Patel's birth anniversary.

The Narendra Modi government has been observing Patel's birth anniversary as the "Rashtriya Ekta Diwas" since 2014.

He is credited for the merger of over 560 princely states into the Union of India.

As part of Patel's birth anniversary celebrations, various programmes are being organised across the country, recalling his contribution to the unification of India.

Prime Minister Modi attended a special function in Gujarat's Kevadia where a giant statue of Patel is located.