DGCA chief Arun Kumar said the Air India Express plane had made a late touchdown even though the runway was long enough for a bigger aircraft. 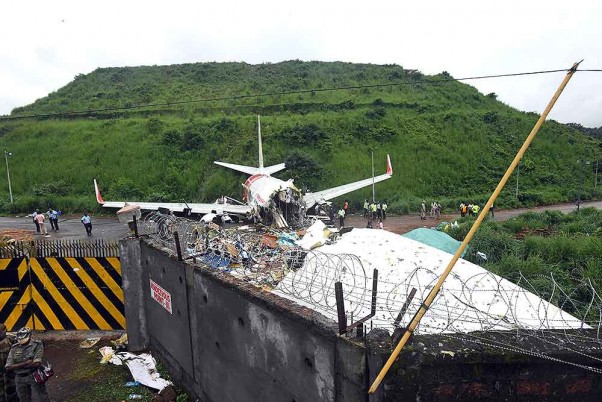 Both the pilots of the Air India Express plane that crashed in Kerala’s Kozhikode were informed about the bad weather conditions -- a reason that might have been a factor in the tragic crash. Apart from adverse weather conditions, a late touchdown may have led to the skidding off of the plane into a valley, Directorate general of civil aviation (DGCA) chief Arun Kumar said.

A report in NDTV quoted Kumar as saying that both the pilots were alerted about the bad weather in the area and also about the tailwinds, which, however, were "within permissible limits".

"The ATC had briefed the pilots about the weather condition... the call has to be taken by the commander to go around or to land," NDTV quoted DGCA chief Kumar as saying.

Another report in HT quoted Kumar as saying that the plane had made a late touchdown even though the runway was long enough for a bigger aircraft.

“We don’t know much, the actual investigation is on... All we know at this point of time is that the touchdown was late,” HT quoted Kumar as saying.

It is believed that the aircraft had landed more than 1 kilometre down the length of the runway in bad weather conditions. The probe is looking into this aspect as the late touchdown on a wet runway would have impacted the braking performance of the aircraft.

The DGCA chief said the investigation is on to find out the cause of the crash and flight data recorder and the cockpit voice recorder are being studied.

The Air India Express plane that was ferrying passengers from the Dubai crash landed at Kozhikode airport and was split into two. Both the pilots among 18 people were killed in the crash.