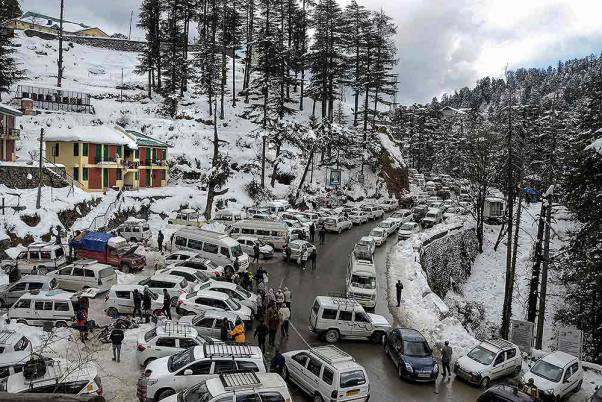 Not many are amused at the soaring fuel prices, rather the mood is somber in the hill towns of Shimla and Manali — packed with weekend tourists. It's more anger and helplessness than disquiet.

“Now, those wishing to travel to hill destinations in the summer will have to shell out 30 per cent extra. Every one -- tourists as well as hoteliers --- will be affected by the increase in the prices,” he said, recalling as how the pandemic had already caused a setback to the tourism industry in 2020.

So, instead of giving some respite to the hotel industry reeling under the crisis since February 2020, the steep climb in the prices of petrol and diesel are bound to have a strong impact on the common man, and also budget tourists.

Kant said in Himachal Pradesh, there’s 25 per cent VAT on the petrol and 14 per cent on diesel. This means if the state government wanted to give relief, it could have really reduced its share of VAT to bring down the prices.

Only last night, the local taxi unions in all major tourist towns decided to raise the fares by 30 per cent owing to rising diesel and petrol prices. The tourists are bound to feel the pinch.

Sandip Sood, a taxi operator in Shimla, hailed the move of the union to make the business viable. “Our rates are the same as were fixed when the petrol was selling at Rs 62 per litre and diesel at half of what is it going for today. Pandemic lockdown broke the backbone of the tour and travel sector and now the petrol prices have hit us hard.”

As Shimla locked packed with weekend tourists, many admitted that petrol prices will affect the middle class severely.

“If a rental car cost us Rs 10,000 to Rs 12,000 for a round trip from Chandigarh, this will shoot up to to Rs 18,000 for a family of three. The increase in the taxi fares is not unexpected as the travel agencies also have to survive,” said Prashant Garg, an assistant director (agri) in the Punjab government.

The hoteliers who provide pick-and-drop facility to the tourists as part of their package are also agitated over the adverse impact of the petroleum prices.

“We are expecting a good tourist season in the next summer. A lot of people who could not come because of the lockdown and fears of the Covid-19 infection will surely come to the hills to holiday. But the rising prices of the petrol and diesel will surely upset their budget,” said Sanjay Sood, president, Shimla Hotels and Restaurants Association.

The impact of the higher freight rates will hit the apple growers in the next fruit season as they had to transport the apple boxes to major wholesale markets in Delhi, Chennai, Mumbai, Pune, Jaipur, Ahmedabad, Kolkata and Nagpur.