The police officials accused farmers of entering the routes which were not meant for them. 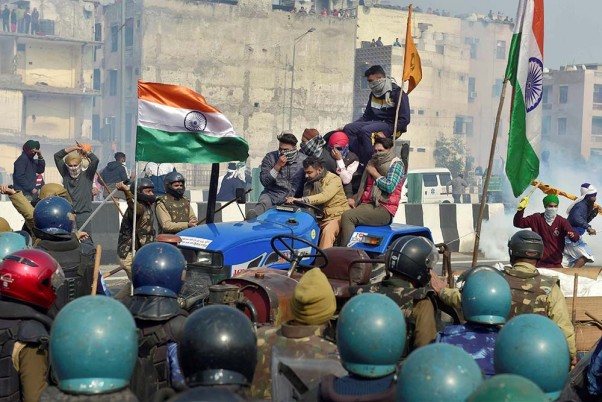 The Palwal police chief along with another officer had a close call on Tuesday after some protesting farmers allegedly drove their tractors dangerously, which endangered the life of on duty police personnel. Reportedly, farmers tried to break barricades to force their way into Delhi through a non-designated route at Palwal-Faridabad border, police said.

The police officials accused farmers of entering the routes which were not meant for them.

They said the farmers had been given a different route for their tractor parade, but they did not stick to it. Hence, police had to use their force and resort to lathicharge.

A Palwal police official said some farmers drove their tractors dangerously on the Agra-Mathura-Delhi Highway, endangering the lives of police personnel on duty, which prompted the police action.

Some farmers were injured in the incident. Palwal SP Gahlawat told PTI a few policemen were also hurt.

"We were trying to persuade them (farmers) to use the designated route allotted to them, but some among them turned violent. About 4-5 tractors dangerously drove towards us and I and one more officer had a narrow escape," he said.

He said it was at that point that the police decided to use force to stop the farmers from proceeding ahead in that fashion.

Gahlawat said just before the tractor parade, the Palwal police held dialogues with the group of farmers who had been sitting in protest there for the past several days.

"We had given them the option of using 60 km stretch of KGP expressway and told them they could use the route after taking a right turn from Faridabad's Sector 58. However, they were adamant on using the other route towards Delhi, which we had disallowed," he said.

Meanwhile, security had been stepped up in Palwal and Faridabad districts, which are in close proximity of the national capital.

As part of the larger tractor parade, wielding sticks and clubs and holding the tricolour and union flags, tens of thousands of farmers atop tractors broke barriers, clashed with police and entered Delhi from various points to lay siege to the Red Fort and climb the flagpole on Republic Day on Tuesday.

Farmers, mostly from Punjab, Haryana and western Uttar Pradesh, have been camping at several Delhi border points, including Tikri, Singhu and Ghazipur, since November 28, demanding a complete repeal of three farm laws and a legal guarantee on minimum support price for their crops.