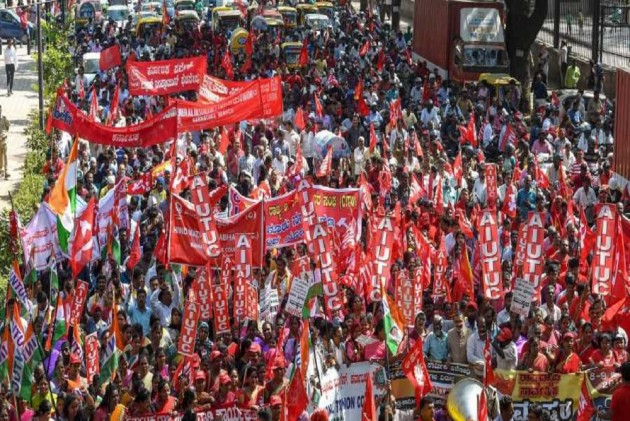 Ten central trade unions on Tuesday said they are going ahead with their planned nationwide general strike on November 26 and also announced their support to a two-day farmers' agitation next week.

The meeting of the Joint Platform of Central Trade Unions (CTUs) and Sectoral Independent Federations and Associations was held virtually on November 16, 2020.

Unions expressed satisfaction over the tremendous response being received from workers and the people at large throughout the country to the ongoing campaign for the countrywide general strike on November 26, 2020, a joint forum statement said.

The preparatory campaign for the general strike against "the anti-people, anti-worker, anti-national and destructive policies of the BJP government led by Modi has been going on with great enthusiasm all over the country", the statement said.

Joint conventions, posters, leaflets jointly as well as independently by the central trade unions and their affiliated trade unions are being held at state, district and local levels as well as at the sectoral level.

The strike notices have been served, it said adding that in addition to workers, people from all walks of life and all sections of the society, viz, students, youth, women, peasants have been coming forward extending their whole-hearted support to the call of a general strike on November 26.

The meeting welcomed the whole-hearted support extended by the united platform of the peasants' organisations, the All India Kisan Sangharsh Coordination Committee (AIKSCC), to the general strike by the workers.

"It is heartening that the peasants, who are already in the midst of struggle against the draconian farm laws passed by the Modi govt, support the workers fighting against the anti-worker measures of this government," it added.

The Joint Platform and Sectoral Federations and Associations, which has been extending active solidarity and support to the struggles of the peasantry and agricultural workers from the very beginning, has reiterated its active support to the countrywide protest actions and march to Delhi on 26-27 November 2020 announced by the AIKSCC.

The charter of demands of the general strike by CTUs and federations and associations includes the demand to scrap the draconian farm laws.

Along with the demands directly related to the workers, the trade unions have also been campaigning on this demand, it added.

Meanwhile, the All India Power Engineers Federation (AIPEF) has also stated that power engineers across the country will protest on November 26 against the privatisation policies of the central government.

The AIPEF is demanding to scrap of Electricity (Amendment) Bill, 2020 and standard bidding document (SBD) for the privatisation of electricity.