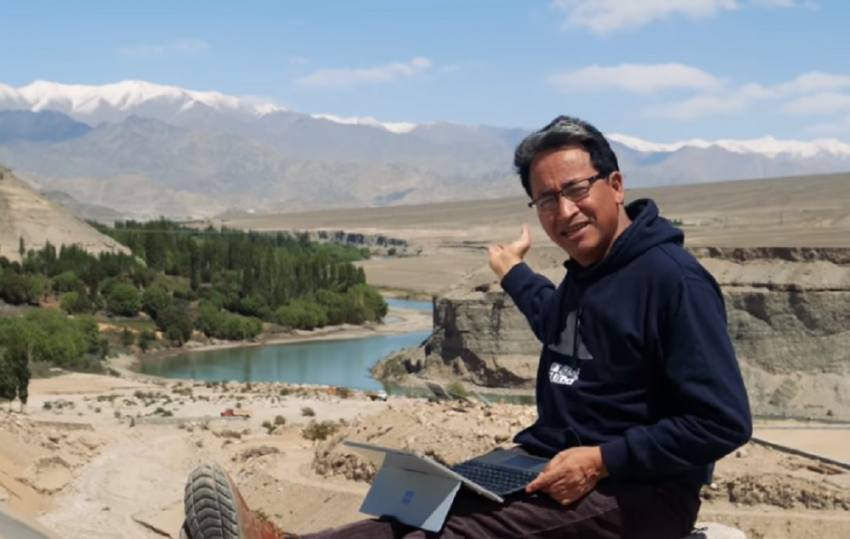 Ladakh-based innovator and climate expert Sonam wangchuk upheld the use of traditional wisdom and social capital to secure the mountains against natural disasters, mainly induced by extreme weather events.

Wangchuk warned against ‘para- dropping’ modern technologies like building concrete structures in the mountains, which will never withstand the impact of disasters, rather can turn into ‘killers’, resulting in massive human casualties.

“It’s always said earthquakes don’t kill but buildings do. Same way, disasters will not kill but lack of preparedness, and its impact will certainly kill” he said at the end of two-day Climate Change Conference -2021, organised by Himachal Pradesh’s department of Science, Technology and Environment .

Similarly in Ladakh, which was hit by unprecedented flash floods on August 9 when 1000 people died or got washed away but the traditional mud-houses, built by the locals using traditional knowledge and local social capitals, survived as against massive concrete structures at Leh.

“This is what we have to learn from the experiences and prepare ourselves to reduce the impact of the major disasters. The people in the mountain know disasters will happen thus they are pre-prepared .It’s high time that we should have confidence in the knowledge and wisdom and blend with modern technologies,“ he stressed.

The experts participating in climate change conference shared their concern about fast melting of the glaciers, GLOFs, (Glacier Lakes outburst floods) massive impact of the climate changes seen in the mountains and resolved for taking concrete measures ,like setting –up of multi-hazard early warning system for disaster risk reductions .

Anand Sharma former Director, Meteorological Center at Dehradun—the man who had predicted the 2013 Kedarnath Disaster told Outlook that a multi-hazard early warning system is the need of the hour, especially for the Himalayan region inview of increased vulnerability to climate change hazards and disasters.

“But, it has to be followed-up by steps like monitoring and preparedness, strong communication tools to alert the population likely to be affected by the disaster forecasted and most importantly a strong response at the ground. There has to be a complete harmony in all these four steps. Any weak link will render the early warning system a meaningless exercise. This is what had happened in the Kedarnath tragedy. The loss was massive, unimaginable,“ he recalled.

Sharma says Kinnaur, Himachal Pradesh's high altitude district for example is a highly vulnerable area, besides Lahaul-Spiti, Kullu, Chamba, Shimla, Kangra and Sirmaur. The state must have an early warning system coupled with other measures to prevent disasters and timely interventions.