Senior Congress leader Birajit Sinha was seen pedalling a cycle rickshaw in Kailashahar town in North Tripura district on Friday to protest against rising prices of petrol and diesel. 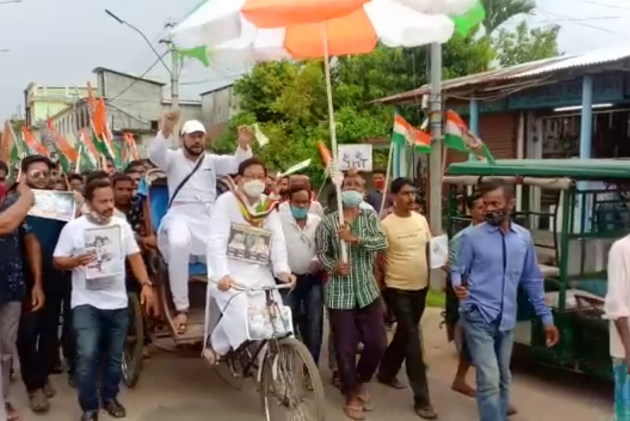 In a unique manner of protesting against rising fuel prices under the Narendra Modi government, former Minister and senior Congress leader Birajit Sinha was seen pedalling a cycle rickshaw in Kailashahar town in North Tripura district on Friday. Hundreds of his supporters with party flags and posters raised anti-Modi slogans during the event.

Slamming PM Modi, Sinha, a member of All India Congress Committee (AICC) said, “Since BJP came to power, the manner in which there has been price hike of daily necessary commodities has left the people of India breathless. You can see what the price of petrol was during the tenure of Manmohan Singh and what it is in Modi’s time. The price of the food items is also out of reach of the common man and the government failed to stop the increasing price.”

Sinha said that pedalling a cycle rickshaw is his symbolic protest against the fuel price hike by Modi because common people are unable to use the motorized vehicle. The price of all essential items including food has also increased due to the fuel price hike, get said.

"This government is for the rich corporate and profit makers and we have declared a ‘jehad’ against this government. We are protesting for its fall from the country and Tripura. The price of diesel and petrol is above the reach of common man, and the youth is not able to ride their bikes. So I have paddled the rickshaw to protest against the price hike of diesel and petrol. We are also protesting against mobile hacking.”

The Congress leader claimed that there shall be more such protests across the state till the BJP led government in the centre as well as in the state are down.